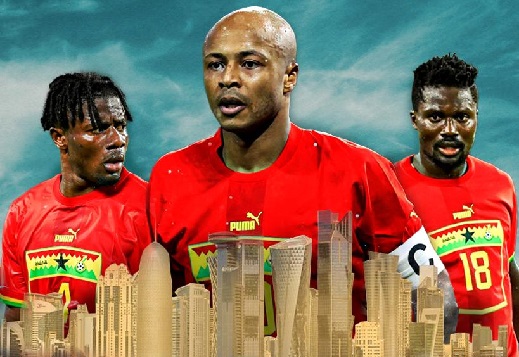 The Black Stars of Ghana will engage Switzerland in a pre-World Cup friendly in Abu Dhabi today.

The match which is scheduled for a 10:00 GMT kick off will take place at the Zayad Sports complex in Abu Dhabi on Thursday, November 17, 2022.

The clash will give the teams an opportunity to assess their strength going into the FIFA World Cup Qatar 2022 finals in Doha.

Speaking ahead of this morning's game Black Stars coach Otto Addo said the friendly against Switzerland will be a good test for his team ahead of the World Cup opening match against Portugal.

READ ALSO: World Cup 2022: Revenge on the radar for the new Black Stars

"We have the possibility to play against a very good team. It’s a good challenge before the World Cup and the last test and for us its very good to try somethings and to see also some players in certain positions and from the tactical point of view we can have some more insights on tactical things’,’ Otto told ghanafa.org.

"We still have a lot of work to do, surely, we analyzed Switzerland so we have to adapt to their style. Because depending on their system there are different positions we have to take and different gaps we have to use. And also, defensively it’s a bit of a different approach so this sometimes demands different players but we are very prepared, and I think in all it’s a very good preparation for Portugal."

"They have a very, very strong team. They have shown that by qualifying for the World Cup, they are a really good team, they have good players in the team who play high profile clubs and for us it’s a very good test. Everybody is ready, everybody is hungry, we are looking forward to the World Cup."

‘’But surely, it’s also about positions, so the starting eleven is not 100% sure so everybody has a good chance to show himself again and to show us as technical staff that they are capable of playing international games and this is a good test’’.</p>

"Like I said, the guys look sharp, they are ready. It’s a very, very good challenge for us to play Switzerland and this can also make impact for our decisions as to who will play against Portugal,"he added.

Black Stars will take on Portugal in their first game on November 24 before playing South Korea and Uruguay on November 28 and December 2 respectively at the FIFA World Cup 2022 in Qatar.