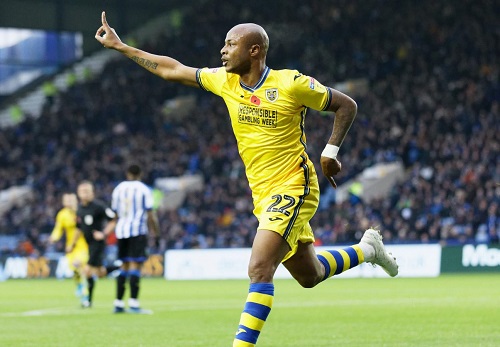 Black Stars captain Andre Ayew has insisted playing in the English Football League Championship is tough and one needs to be ready physically and mentally to compete.

The Swansea midfielder returns to action after the international as his side will be playing three games in six days against Millwall, Huddersfield and Fulham.

According to the former Westham attacker, his outfit is ready for the challenges and wants his club to pick up from where they left off having racked up seven points from a possible nine before the break.

He added that each match should be taken as it comes.

"It’s very hectic in the Championship. You need to be ready for it – physically and mentally – and must always be willing to do more and more,” the 29-year old told the club website.

“We are ready for that. We will prepare properly. We’ve had good results in our last three games so we must make sure we hit the ground running again.

“We want to try to get a good win at home against Millwall. It’s going to be a hard game but, with the quality we have, I’m confident we can get a result."

“Of course, it’s very important that we take one game at a time, but we must aim to get a couple of good results as that will set us up nicely."

Ayew during the international break aided the Black Stars as they maintained a 100% record in the AFCON 2021 qualifiers beating South Africa and Sao Tome and Principe respectively in the opening two games.