Zachariassen is the worst Kotoko coach ever - Karim Zito 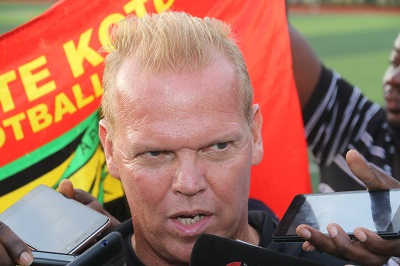 Former Asante Kotoko coach Abdul Karim Zito says Kjetil Zachariassen is the worst ever coach to be appointed by the Kumasi-based club.

Speaking on Accra-based Angel FM, Karim Zito said, throughout his playing career and now as a coach, the Norwegian trainer ranks below the list of coaches the Porcupines have appointed.

"During my playing time and as a coach, he is the worst coach Kotoko has ever hired."

"I don't see him, as a coach. He should come out and explain to us why he benched certain key players in the San Pedro clash in Abidjan."

Zito also advised Executive chairman of Kotoko Dr Kwame Kyei to forget about going to Africa and build a solid team rather.

"Kotoko should forget about Africa for now and start rebuilding and in order not to put pressure on any coach they appoint because going to Africa is a long term project."

In the wake of Kotoko's exit from the CAF Confederation Cup, section of the Reds faithfuls is calling for the head of the coach as well some management members have asked the coach to resign, but Charles Kouadio who is the agent of Kjetil Zachariassen has insisted that his client has no intention of resigning from his post unless the Porcupines terminate his contract.

According to Charles Koudio, his client is bent on honouring his three-year mandate given in July this year.