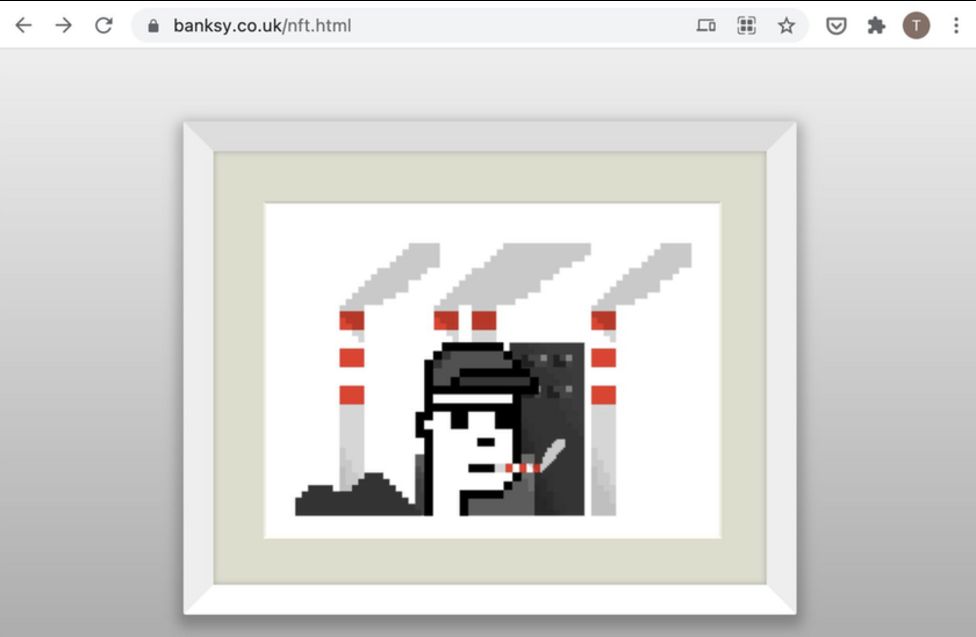 A hacker has returned $336,000 to a British collector after he tricked him into buying a fake NFT advertised through the artist's official website.

A link to an online auction for the NFT was posted on a now-deleted page of banksy.co.uk.

The auction ended early after the man offered 90% more than rival bidders.

Banksy's team told the BBC "any Banksy NFT auctions are not affiliated with the artist in any shape or form".

With NFTs, artwork can be "tokenised" to create a digital certificate of ownership that can be bought and sold.

They do not generally give the buyer the actual artwork or its copyright.

The Banksy fan who got duped says he thought he was buying the world-famous graffiti artist's first ever NFT.

The man who is in his 30s and wanted to remain anonymous explained over Twitter direct messages that he suspects Banksy's site was hacked, and that he was the victim of an elaborate scam.

He says the hacker returned all the money except for the transaction fee of around Â£5,000 on Monday evening.

The prominent NFT collector uses the online name Pranksy said the whole episode was bizarre but that the hacker may have got scared.

"The refund was totally unexpected, I think the press coverage of the hack plus the fact that I had found the hacker and followed him on Twitter may have pushed him into a refund.

"I feel very lucky when a lot of others in a similar situation with less reach would not have had the same outcome," he said.

He says he was first alerted to the auction by an anonymous person in his community on the social network Discord on Monday morning.

Banksy's official site had a new page called NFT which included a link to an auction site selling an NFT called Great Redistribution of the Climate Change Disaster.

After entering a bid far above his rivals the auction was swiftly ended and the funds - in cryptocurrency Ethereum - were sent to the scammer.

'Feels like a hack'
"It does seem to be some hack of the site. I confirmed the URL on PC and mobile before bidding. I only made the bid because it was hosted on his site.

"When the bid was accepted I immediately thought it was probably fake," he said.

Banksy's team did not respond to questions about how his site was compromised but said: "The artist Banksy has not created any NFT artworks."

The buyer suspects the person who alerted him and others to the Banksy NFT sale may have been the hacker themselves.

'Irreversible'
Tom Robinson, from cryptocurrency analysis company Elliptic, confirmed there was nothing the buyer could do once he has placed his bid on the auction platform OpenSea.

"OpenSea is the eBay of NFTs - it allows anyone to sell digital art that they own, or have created themselves. Once a bid has been placed, the seller can accept and the cryptocurrency is irreversibly transferred," he said.