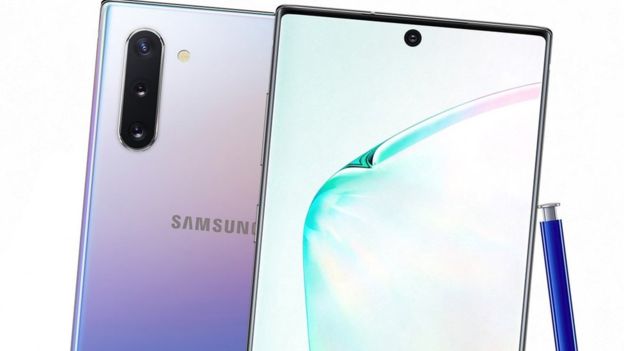 Remember how outlandish the first Samsung Galaxy Note looked when it was unveiled in 2011? It was huge - a smartphone with a 5.3in (13cm) screen and a stylus.

I remember standing on a Barcelona street with an early version, embarrassed to put it to my ear and make a call because I'd look like something out of a Dom Joly sketch.

But it quickly won a sizeable fan base including the kind of people who had owned Psion Organisers or the Nokia Communicator.

They wanted a device that could do almost everything a laptop could do.
Over the years, many smartphones have acquired those kinds of capabilities and just about all of them have grown much bigger.

For Samsung, that presents a challenge - how can it make each new model stand out from the crowd?

At its swish new exhibition space in London's Kings Cross this week, Samsung invited technology journalists to come and try out the latest Galaxy Note.

Key difference
Set out on pine tables, the Note 10 and the Note 10+ looked... well, like any other smartphones - shiny slabs of glass.

They were, of course, huge, quite a bit bigger than the original humungous Note. The new Note 10 has a 6.3in screen and the 6.8in Note 10+ is virtually the size of a tablet.

But then again, Samsung's latest flagship Galaxy S10+ has a 6.4in screen and the 5G version has a 6.7in screen.

Terrible handwriting
"The S-Pen is the key reason most European users choose the Note," he says.

Over the years, the stylus has become ever more sophisticated. In the Note 10, you can use it to scribble a message and have your terrible handwriting converted to text. It also works as a remote control for the camera.

Once, the idea of using something the size of a Note to take photos or shoot video was almost as laughable as doing such a thing with an iPad.

But now it has become commonplace and, as with any new phone, Samsung has a lot to say about its new camera features.

Extreme sports
You can use augmented reality emojis to give yourself a dinosaur's head. And there's a feature called Live Focus Video that lets you focus on a subject and blur the background in real-time.

It also has a "zoom microphone" that gives enhanced audio from whatever is in the center of the frame, even from across a room.

And then there's Super Steady video stabilization, which Mr. Holloway suggested might be used for extreme sports. Although, to me, the idea of a skydiver or downhill skier strapping on a Note 10 seems optimistic to say the least.

But it seems Samsung has concluded the Note now has to be all things to all people - the business users who will take advantage of the ability to transfer content seamlessly between the phone and their laptop, the Instagrammers using all the camera's bells and whistles to make their Stories more creative, even gamers wanting to play Call of Duty on the move without draining the battery.

Plunging profits
And make no mistake, Samsung is in need of a hit. The Galaxy S10 won great reviews but less than stellar sales.

Last week, the South Korean giant reported plunging profits. Much of the blame was put on its core chip business but the lackluster performance of the mobile phone division did not help.

The global smartphone market has stuttered, with the research company Gartner predicting a 2.5% decline in worldwide sales this year compared with 2019. And despite Huawei's problems, Chinese rivals offering very capable phones at lower prices threaten to eat into Samsung's market share.

The radical new folding phone was meant to signal the next phase of innovation but the new dawn has been delayed by production problems. The Samsung Fold is now due to go on sale in September.

Even then, expensive folding phones are likely to appeal to a small niche of early adopters at first.

Samsung will have to hope the rather larger crowd that has been drawn to the Galaxy Note over the years stays loyal to this latest version.