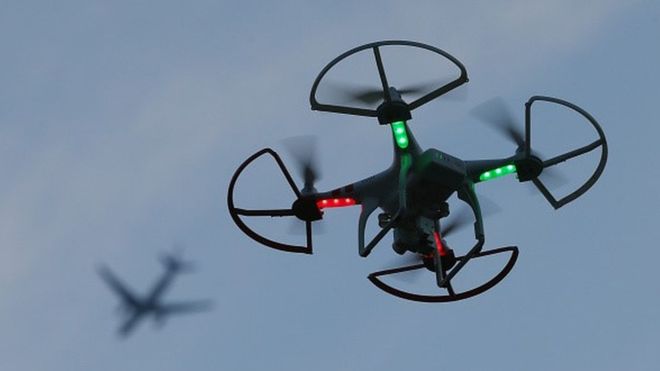 Anyone who buys a drone in future in the UK may have to register it and take a safety test.

That could be the outcome of a government consultation on strict new drone safety rules.

There could also be tougher penalties for anyone who flies a drone in a no-fly zone, with the possibility of a new criminal offence of misuse of a drone.

Drone use has become widespread in the past few years, with drones available cheaply in high street shops.

The government says drones have enormous economic potential and are already being used by everyone from the emergency services and conservation groups to energy and transport firms. 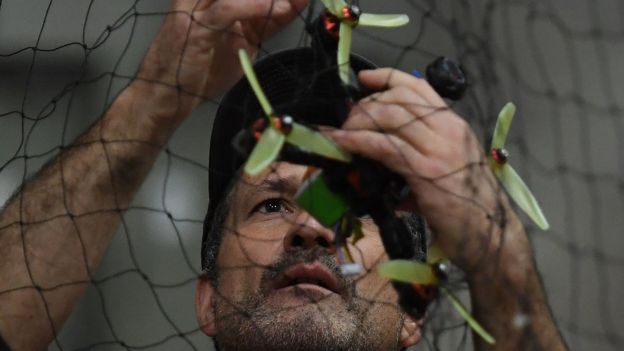 But the Aviation Minister, Lord Ahmad, said while the vast majority of drone users were law-abiding, "some are not aware of the rules or choose to break them putting public safety, privacy and security at risk".

There are already strict regulations for all drone users.

Any drone with a camera cannot be flown within 50 metres of buildings, vehicles, people or over large crowds.

Anyone using a drone for commercial purposes has to register with the Civil Aviation Authority (CAA).

But now leisure users may have to register their drones and perhaps undertake a test similar to the driving theory test.

This will apply to any drone weighing over 250g (0.55lb) - which covers just about anything more than a toy.

Simon Dale, of the FPV group for drone pilots, is unhappy about any plan to make leisure users register.

"It will impact the safe and sensible drone fliers and will not affect criminals or terrorists," he said.

Drone users could have to pay a hefty fee, Mr Dale fears: "Setting up a drone equivalent of the DVLA is likely to be costly."

"What really annoys me is the different rules for drones with or without cameras," he said.

"It's nothing to do with privacy - it's an assumption that the drone will be much heavier and can drop on people's heads - which is no longer true."

But concerns about safety have risen.

Jonathan Nicholson, from the Civil Aviation Authority, said: "We do see a rise in the number of near misses reported by airline pilots, and we have had complaints from members of the public about drones being flown too close to them, which the police receive."

He urged users to familiarise themselves with the CAA's Drone Code.

The government says the drone industry could be worth billions by 2025.

But ministers believe it will only be a success if it is done safely, and with the consent of the public.

The UK's proposed safety test is just one of a flurry of drone-related developments in recent days. Others include:

The US's Federal Aviation Administration has revealed it has processed 23,818 applications to use drones for commercial purposes since it introduced a registration scheme in August

Facebook's July test flight of its Aquila drone ended in a crash landing, the US's National Transportation Safety Board has confirmed. It said that it appears that the Aquila aircraft encountered wind gusts that were about twice as strong as it could handle, which caused damage to one of its wings during its final approach