The robot chefs that can cook your Christmas dinner 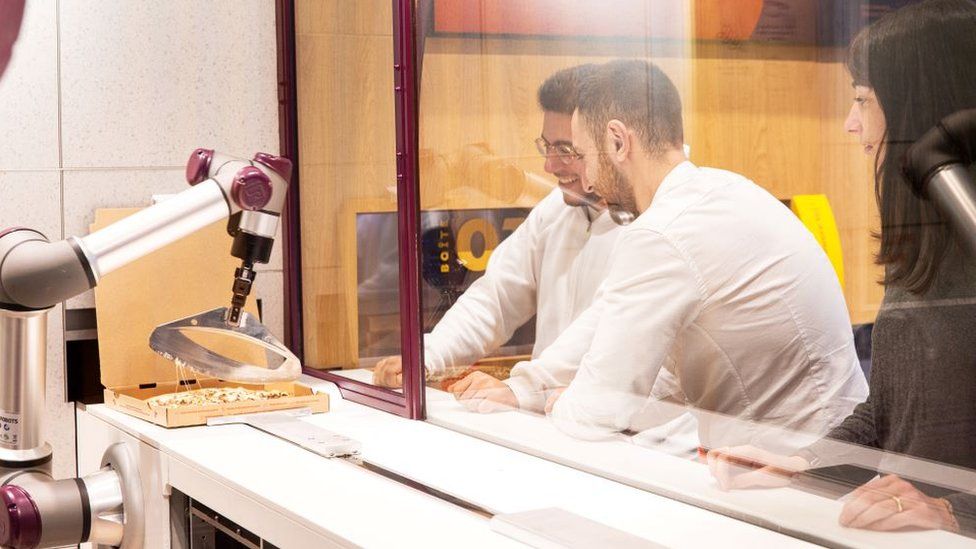 If you are dreading having to cook your family's Christmas Day dinner then you are definitely not alone.

But for future Christmases there is now a new alternative - get a robot chef to do everything.

A number of tech firms are now developing robots that can cook and plate up entire meals, both for commercial and domestic kitchens.

One of those at the forefront is London-based Moley Robotics, which is due to release its product, the Moley Robotic Kitchen, next year.

Attached to rails fitted to the ceiling, two robotic arms hang down over your oven and hob, and can cook more than 5,000 different recipes. You just pick the dish in question on a touch screen, add the ingredients it tells you to the built-in containers, and it does everything else. 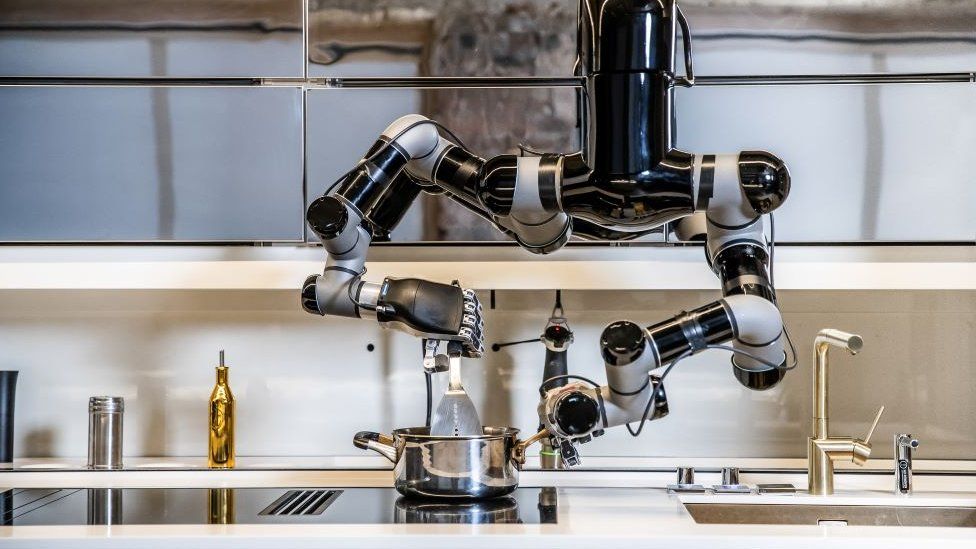 It can turn on the oven and hob, pick up and put down saucepans and spatulas, stir, whisk and flip.

To help develop the robot, Moley employed the services of professional chef Tim Anderson, who back in 2011 won the BBC's MasterChef TV competition.

He explains how he would make dishes, and the robot would be programed to copy his movement.

"I would cook through the recipe in a kitchen with a layout to that of the Moley kitchen, and my movements would be recorded, and then transferred onto the robotic hands and arms," says Mr Anderson.

"Those movements would then be streamlined by the robotics team, and in the end, we wound up with a consistent program that would produce the same dish every time."

Moley's chief executive Mark Oleynik says the system operates behind a glass screen so that the robotic arms cannot knock into a human.

"As an additional measure, we have safety radar systems able to detect any unwanted impacts between the robot and any surface and immediately stop the operation, thus mitigating any such risks altogether."

Mr Oleynik adds that the robot chef could indeed help you make your Christmas Day meal. But for any home cook wishing to rush to place an order, there is currently a significant problem - the cost.

The minimum price of a Moley Robotic Kitchen is £150,000. Other similarly expensive kitchen robot systems are being developed by Israel's Kitchen Robotics, and US firm Dexai Robotics.

Yet the price of such systems is likely to drop, says Julia Segal, senior strategist at US food consultancy The Culinary Edge: "Many of these technologies start well out of reach of the average home cook. However, as the technologies continue to proliferate, costs will eventually come down."

One restaurant group that already uses a robot for all its cooking is French pizza mini-chain Pazzi.

The business is owned by two robotic engineering students, who designed their own pizza-making robot and then opened their first branch in Paris in 2019. They now have a second outlet in the French capital and another in Brussels.

Once an order is received, the robot in each location completes the full process - pressing the dough, adding the sauce, putting on the chosen toppings, cooking the pizza, placing it in the takeaway box, slicing it into pieces, and handing it to the customer. This is said to take just five minutes per pizza.

Co-founder and chief executive Philippe Goldman says the robots have been programed to maintain top quality control. "When the robot presses the dough, if it detects some holes in the dough, it's going to reject it, put it in the trash and make a new one."

While the kitchen is fully autonomous when the restaurants are open, Pazzi does have human employees. These prepare the ingredients and load the robots in the morning, and then welcome and host customers.

Mr Goldman adds that Pazzi has now received more than 1,000 enquires about its robots, including "a lot coming from Italy", plus from the UK, US and Germany.

Mikaela Pisani Leal is a data scientist and expert in machine learning at Rootstrap, a technology sector management consultancy.

She says robot chefs offer restaurants a host of benefits. "These robots could reduce viruses in food, improve and maintain cleanliness and hygiene... they could turn the industry on its head."

But she also cautions they could result "in job losses, and people having to reinvent themselves".

Wesley Smalley, the owner and head chef of Seasonality, a fine dining restaurant in the Berkshire town of Maidenhead, says that while kitchen robots offer convenience, they won't be of interest to the higher end of the market.

"I don't believe a robot can replace a human touch, especially when it comes to quality restaurants and pubs," he says. "The changes and variations of produce would not allow a robot to adjust or change a recipe according to their flavour characteristics.

"A human chef brings a natural passion and connection to the provenance of ingredients which fundamentally shows in the creation and execution of menus.

"I do however accept that robotics will help with the efficiency and consistency of menial jobs, but let's not forget that someone will still need to program it and stock it with produce."

Yet for many of us due to reluctantly do the cooking at home on Christmas Day, kitchen robots are a tempting thought.