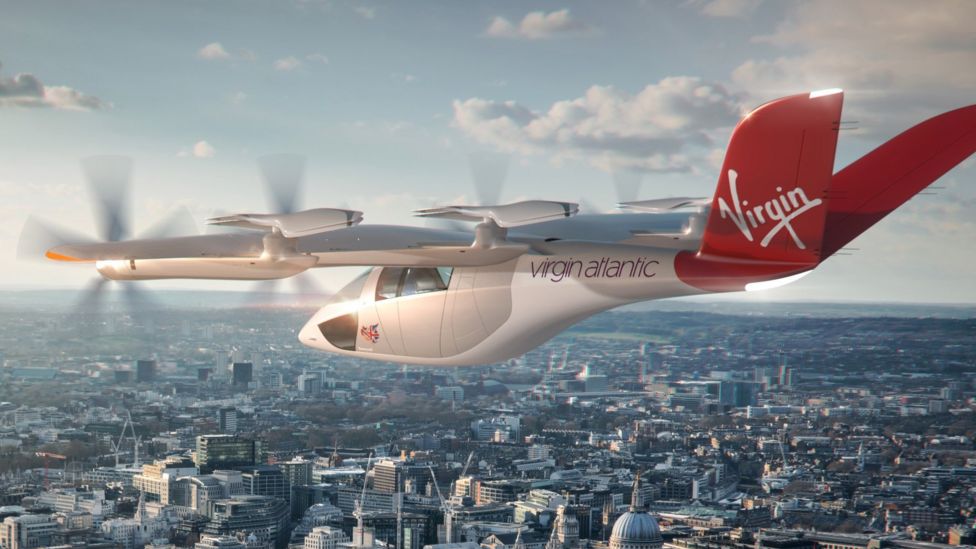 Virgin Atlantic is exploring whether it could launch a flying taxi service as part of a partnership with Bristol-based Vertical Aerospace.

Vertical Aerospace is conducting test flights of its aircraft this year.

One expert said the proposal was "less radical" than those of other air taxi companies, but argued there would be challenges ahead.

What is the idea?
Several companies have promoted the idea of autonomous "flying taxis" that could pick passengers up from rooftops in city centres and take them wherever they would like to go.

It has proposed that an eVTOL aircraft could pick people up from a city such as Cambridge and fly them to a major airport such as London Heathrow.

Vertical Aerospace says its VA-X4 craft will be able to carry four passengers and a pilot up to 100 miles, as well as being emissions-free and quieter than a helicopter.

In fact the company claims it will be "near silent" when cruising.

It has already partnered with American Airlines and Avalon, an aircraft-leasing company.

Is it feasible?
"There's a lot of hype in this market," Vertical Aerospace president Michael Cervenka told the BBC.

"We have taken the approach that is pushing the bounds of what is available in terms of technology, but not going beyond."

With a 15m (49ft) wingspan, the aircraft would have to fly to and from designated spots such as helipads or regional airports.

As with any other aircraft, the VA-X4 will be subjected to strict safety and regulatory checks.

Dr Guy Gratton, associate professor of aviation and the environment at Cranfield University, said Slovenia's Pipistrel Velis gave a good indication of what a modern electric plane could achieve.

"The Velis will carry two people, half a toothbrush and fly for about an hour-and-a-quarter. That is a conventional plane and thus pretty efficient compared to anything with vertical take-off and landing," he explained.

While the VA-X4 will be quieter than a helicopter, the "rotors and wings would still make noise in forward flight", he added.

Mr Cervenka expects it will sound no louder than a refrigerator from the ground, when cruising overhead.

He said the company's goals could be achieved with today's technology rather than hoping for the invention of a "magical new battery".

But more lavish visuals of air taxis carrying passengers from one skyscraper to another would require new air-traffic control technology, public acceptance of more aircraft in cities, improvements in automation and regulatory change that could be a decade away.

On Thursday, Vertical Aerospace announced plans for the company to be floated on the New York stock exchange after a merger with Broadstone, in a deal valuing the company at $2.2bn (Â£1.6bn).