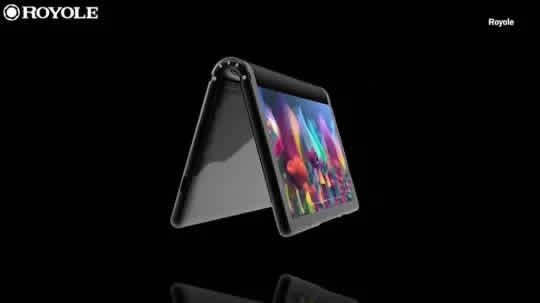 Samsung had high hopes to be the first tech company to reveal a folding smartphone, but itâ€™s been beaten to the punch.

The Royole Corporation is an American tech company that has just revealed the worldâ€™s first folding phone called the FlexPai.

It can be used as either a phone or a tablet. Dr Bill Liu, CEO of Royole, said: â€˜The Royole FlexPai foldable smartphone provides mobile phone users with a revolutionary, different experience compared to traditional phones.â€™

â€˜It perfectly solves the contradiction between the high-definition large-screen experience and portability, which introduces a whole new dimension to the human-machine interface.

â€˜The phoneâ€™s inherent design will forever change the consumer electronics industry, as well as the way people interact with and perceive their world.â€™

The company tested the design by bending it back and forward over 200,000 times. Itâ€™s got all the usual smartphone features: a 20-megapixel camera, fingerprint scanner, USB-C charging and storage expansion via MicroSD.

Meanwhile, Samsung could be set to reveal its own foldable phone later this month. Samsung is holding a developer conference in November that could give us our first look at the new form factor.

This gels nicely with comments from Samsungâ€™s mobile bossÂ  DJ Koh, who said the phone will be revealed towards the end of 2018, but wonâ€™t go on sale until 2019. Koh previously told CNBC that itâ€™s â€˜time to deliverâ€™ on the device after research showed people are very interested.

â€˜You can use most of the uses â€¦ on foldable status. But when you need to browse or see something, then you may need to unfold it.

But even unfolded, what kind of benefit does that give compared to the tablet? If the unfolded experience is the same as the tablet, why would they (consumers) buy it?,â€™ Koh told the site at the IFA tech conference in Berlin earlier this year.

We originally werenâ€™t expecting this device to break cover until at least next year. But the South Korean company may have decided to bring it in earlier to try and stimulate some growth in the mobile division.