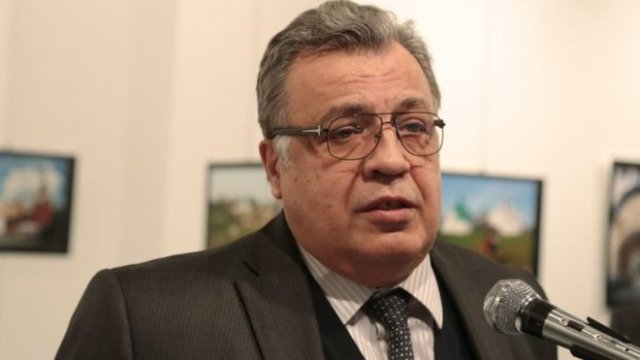 A gunman has shot dead Russia's ambassador to Turkey, Andrei Karlov, apparently in protest at Russia's involvement in the Syrian conflict.

Several other people were reportedly also injured in the attack, a day after protests in Turkey over Russia's military intervention in Syria.

The killer, said to be an off-duty Turkish policeman, opened fire at point blank range as Mr Karlov made a speech.

Mr Karlov was rushed to hospital, reports said, but his death was later confirmed by the Russian foreign ministry.

"Terrorism will not pass! We will fight it resolutely," said ministry spokeswoman Maria Zakharova.

"The memory of this outstanding Russian diplomat, a man who did so much to counter terrorism... will remain in our hearts forever," she said.

US state department spokesman John Kirby said US officials were aware of reports about the attack on the ambassador.

"We condemn this act of violence, whatever its source," he said. "Our thoughts and prayers are with him and his family."

While there were protests in recent days about the situation in Aleppo, on a political level the Turkish and Russian governments have been co-operating in the ceasefire operation, the BBC's Turkey correspondent, Mark Lowen, reports.

According to Russian TV, the ambassador had been attending an exhibition called "Russia as seen by Turks".

Video of the event shows Mr Karlov making a speech when gunshots ring out. Eight bullets are said to have been fired.

The camera pulls back to show a smartly dressed gunman, wearing a suit and tie, waving a pistol and shouting.

Andrei Karlov, 62, was a veteran diplomat who had served as Soviet ambassador to North Korea for much of the 1980s.

After the fall of the USSR in 1991, he had a posting as Russian ambassador to South Korea before returning to the North for five years in 2001.

Taking up the Ankara posting in July 2013, he had to grapple with a major diplomatic crisis last year when a Turkish plane shot down a Russian jet close to the Syrian border.