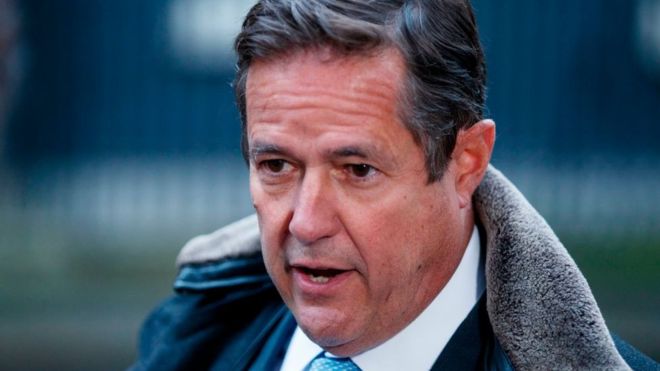 His comments come after Barclays revealed that UK regulators are investigating the chief executive's links with the disgraced financier.

Mr Staley admitted he maintained contact with Epstein, who died in New York prison cell last year, for seven years after his conviction.

Barclays said Mr Staley has the "full confidence" of the board.

"It has been very well known I had a professional relationship with Jeffrey Epstein," Mr Staley told reporters on Thursday. "It goes back to 2000 when I was asked to run the JP Morgan private bank and he was already a client when I joined the private bank.

"The relationship was maintained during my time at JP Morgan but as I left JP Morgan the relationship tapered off quite significantly. Obviously I thought I knew him well and I didn't. For sure, with hindsight with what we know now, I deeply regret having any relationship with Jeffrey."

Epstein died in his prison last August after being charged with sex trafficking underage girls. It came more than a decade after his conviction for soliciting prostitution from a minor, for which he was registered as a sex offender.

The probe by the Financial Conduct Authority and Prudential Regulation Authority will focus on Mr Staley's "characterisation to the company of his relationship" with Epstein.

The Financial Conduct Authority oversees bad behaviour in the City, while the Prudential Regulation Authority looks into financial stability.

Barclays added that Mr Staley said he had had no contact with Epstein since joining his current employer in December 2015. The bank added: "The relationship between Mr Staley and Mr Epstein was the subject of an inquiry from the Financial Conduct Authority, to which the company responded.

"The FCA and the Prudential Regulation Authority subsequently commenced an investigation, which is ongoing, into Mr Staley's characterisation to the company of his relationship with Mr Epstein and the subsequent description of that relationship in the company's response to the FCA."

Separately, in an interview on Bloomberg Television on Thursday, Mr Staley said that he feels he has been transparent with how he characterised his relationship with Epstein.

"The board has done its own review, and they've looked back at my transparency and they concluded indeed that I have been transparent and open with the bank and with the board all along this process," he said. "But there is a regulatory process that is ongoing, and we'll let that run its course."

Nevertheless, the news will be a fresh blow to Mr Staley, who is trying to rebuild his image after being sanctioned for attempting to unmask the identity of a whistleblower at Barclays.

The bank was fined $15m (£11.6m) in the US and Mr Staley was fined £642,430 in the UK for breaching rules by attempting to find whoever raised concerns over an executive Mr Staley hired.

The bank received two letters in 2016 criticising the decision and raising concerns about the executive's experience. Instead of being handed to the bank's investigations team, one of the letters was distributed among senior managers, including Mr Staley.

In another embarrassing episode in 2017, Mr Staley fell for an email prank when a disgruntled customer pretended to be his boss at the time, former chairman John McFarlane.

Mr Staley exchanged several emails with the imposter, who used a Gmail email address, the Financial Times reported. Under his stewardship, the bank's shares have lost about 25% of their value.

The shares were down more than 3% in early trading on Thursday as the bank reported that pre-tax profits for the year jumped 25% to £4.4bn.

It's hardly surprising that Jes Staley had business links to Jeffrey Epstein - Mr Staley ran the private wealth division of JP Morgan, one of America's biggest banks for several years, looking after the private investments of wealthy Americans.

That's exactly the business in which Mr Epstein was a big player, and the New York Times has reported that Mr Staley was one of his key contacts, with several of the deceased financier's big clients being referred to JP Morgan.

This morning Barclays said in an announcement to the Stock Exchange that Mr Staley had volunteered information about that relationship to the Barclays board - but that the Financial Conduct Authority, and the Prudential Regulation Authority, Britain's two largest financial watchdogs, were now looking at exactly what he said.

The key word in Barclays' statement is that investigation is into how the relationship was "characterised" - which infers that the investigators want to work out whether Mr Staley and Barclays gave a completely accurate picture.

This does not necessarily mean big trouble for Mr Staley, and the Barclays board has given him a vote of confidence. Regulators, however, take a dim view of bank bosses who don't play ball from the start, and Mr Staley has blotted his copybook before.