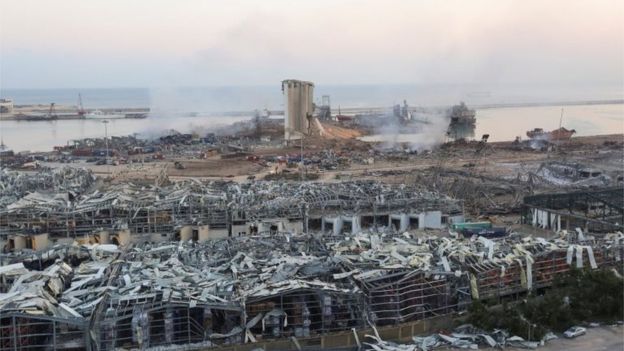 Rescue workers in Lebanon are searching for more than a hundred people who are missing after a huge explosion devastated the port area of the capital Beirut on Tuesday.

The blast killed at least 100 people and injured more than 4,000 others.

The whole city was shaken by the explosion and a mushroom cloud could be seen spreading over the port area.

President Michel Aoun said the blast was caused by 2,750 tonnes of ammonium nitrate stored unsafely in a warehouse.

Ammonium nitrate is used as a fertiliser in agriculture and as an explosive.

President Aoun declared three days of mourning which started on Wednesday. Opening an emergency cabinet meeting, he said: "No words can describe the horror that has hit Beirut last night, turning it into a disaster-stricken city".

"Amid last night's smoke, flames and destruction, I would like to laud the zeal of the Lebanese who rushed to the blast location and perimeter and the hospitals to offer support and assistance," he added.

Eyewitness Hadi Nasrallah says that he saw the fire but did not expect the blast. "I lost my hearing for a few seconds, I knew something was wrong, and then suddenly the glass just shattered all over the car, the cars around us, the shops, the stores, the buildings. Just glass going down from all over the building," he told the BBC.

BBC Arabic reporter Maryem Taoumi was conducting a video interview in Beirut at the time of the explosion.

The BBC's Lina Sinjab said she could feel the wave of the explosion from her home, a five-minute drive from the port area. "My building was shaking, it was about to fall, all windows were forced open," she said.

The blast was also felt 240km (150 miles) away on the island of Cyprus, in the eastern Mediterranean, with people there saying they thought it was an earthquake.

BBC journalist Rami Ruhayem said there was chaos in the aftermath of the blast as ambulances with their sirens wailing inched their way through heavy traffic to get to the site.

There were shards of glass on the highway, that needed to be cleared by tractors, he added.

The head of Lebanon's Red Cross, George Kettani, described it as a "huge catastrophe", adding: "There are victims and casualties everywhere."

The Red Cross said it was working with the Lebanese health ministry to set up morgues. It added that a search and rescue operation was still under way to locate the more than 100 people missing.

Public Health Minister Hamad Hassan said Lebanon's health sector was short of beds and lacked the equipment necessary to treat the injured and care for patients in critical condition.

He said that "a large number of children" had been rescued but added that he feared that the number of dead would rise further.

What triggered it?
Officials said that an investigation was under way to find the exact trigger which caused the ammonium nitrate - which had reportedly been stored in a warehouse after it was unloaded from a ship impounded at the port in 2013 - to explode.

What's the background?
The explosion comes at a sensitive time for Lebanon. With Covid-19 infections on the rise, hospitals were already struggling to cope. Now, they are faced with treating thousands of injured people.

The country is also going through an economic crisis. Lebanon imports most of its food and large quantities of grain stored in the port have been destroyed causing fears of widespread food insecurity to come.

The future of the port itself is in doubt due to the destruction caused. Many building and homes have been reduced to an uninhabitable mess of glass and as many as 300,000 people have been left homeless, Beirut's governor Marwan Aboud said.

Lebanese from areas not affected by the explosion have been taking to social media to offer shelter to those whose homes have been destroyed.

President Aoun announced that the government would release 100 billion lira (£50.5m; $66m) of emergency funds but the impact of the blast on the economy is expected to be long-lasting.

Public Health Minister Hamad Hassan said that the government was "trying, as best we can, to bridge the gap resulting from the economic blockade and the exacerbated economic and financial crisis, to which has been added this new test and scourge as a result of the explosion".

The blast happened close to the scene of a huge car bombing which killed former Prime Minister Rafik Hariri in 2005. A verdict is due in the trial of four men accused of orchestrating the attack on Mr Hariri at a special court in the Netherlands.

Even before the blast, tensions were high in Lebanon, with street demonstrations against the government's handling of the worst economic crisis since the 1975-1990 civil war.

Many blame the ruling elite who have dominated politics for years and amassed their own wealth while failing to carry out the sweeping reforms necessary to solve the country's problems. People have to deal with daily power cuts, a lack of safe drinking water and limited public healthcare.

There has also been tension on the border with Israel, which said last week that it had thwarted an attempt to infiltrate Israeli territory by Hezbollah, a militant Shia Islamist organisation that wields considerable power in Lebanon.

But a senior Israeli official has told the BBC that "Israel has no connection" to the Beirut blast.