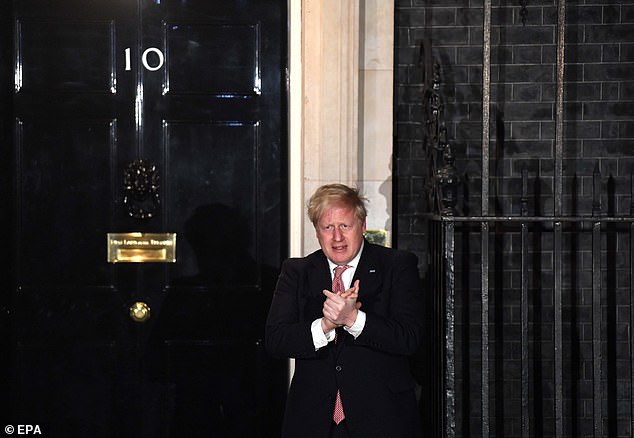 Boris Johnson was outside No10 last night applauding NHS workers who are combating the virus, in a national show of appreciation
Shares

Boris Johnson has been confirmed as suffering from coronavirus, it was revealed today.

The Prime Minister is understood to have tested positive for the disease, as the outbreak spreads across the country.

Mr Johnson is thought to have relatively mild symptoms, but the bombshell news underlines fears that the crisis is escalating.

'The test was carried out in No 10 by NHS staff and the result of the test was positive.

'In keeping with the guidance, the Prime Minister is self-isolating in Downing Street.

'He is continuing to lead the government's response to coronavirus.'

Prince Charles was confirmed as infected with coronavirus earlier this week. Other world leaders such as Canada's Justin Trudeau has tested positive.

Downing Street has previously said that Foreign Secretary Dominic Raab will fill in if the PM is incapacitated, although there is little sign that he has stopped working.

London is regarded as the engine of the outbreak in the UK, and many at Westminster have been struck down with symptoms.

Health minister Nadine Dorries was the first confirmed MP case, and has since recovered and returned to work.

The declared UK death toll rose by 113 to 578 yesterday - the steepest increase yet.

Mr Johnson was outside No10 last night applauding NHS workers who are combating the virus, in a national show of appreciation.

He is thought to have chaired a remote meeting of the coronavirus 'war cabinet' this morning.

Mr Johnson took PMQs in the Commons on Wednesday, which could raise fears other politicians have been infected, even though people have been well spaced out in the chamber.

Cabinet on Tuesday was also carried out over video conference.

Mr Johnson has not taken any of the regular government press conferences this week.

On Monday he gave a dramatic address to the nation in which he declared that the country had to go into lockdown, with no-one leaving their houses unless absolutely necessary,

Mr Johnson's fiance Carrie Symonds is pregnant and is thought to have been self-isolating in line with government advice.

Chancellor Rishi Sunak yesterday took questions from the media alongside the deputy chief medical officer as he unveiled a bail out for the self-employed.

Some 3.8million will be eligible for cash grants worth 80 per cent of salary up to Â£2,500 a month, in a massive boost for taxi drivers, musicians, gig economy workers and freelancers.

However, the Treasury admitted that the scheme will not be up and running until June, and around 200,000 self-employed will not be covered.

Only people turning a profit of less than Â£50,000 a year are eligible, ruling out many accountants, IT consultants, and lawyers.

Families where a breadwinner has an income of Â£50,001 will miss out, while someone turning a Â£49,999 profit would be covered.

Those who invest their profits in their business, or set themselves up as a limited company and pay themselves via a dividend, will also be ineligible.