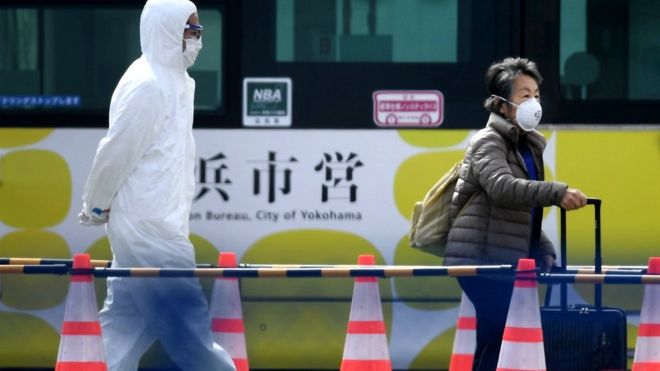 Hundreds of passengers who tested negative for the new coronavirus have begun leaving a quarantined cruise ship in Japan amid heavy criticism over the country's handling of the outbreak.

One Japanese health expert who visited the Diamond Princess at the port in Yokohama said the situation on board was "completely chaotic".

US officials said moves to contain the virus "may not have been sufficient".

Passengers have described the difficult quarantine situation on the vessel.

At least 621 passengers and crew on the Diamond Princess have so far been infected by the Covid-19 virus - the biggest cluster outside mainland China.

The ship was carrying 3,700 people in total.Hundreds of American passengers were removed and placed in quarantine on Sunday. Britons on the vessel have been told by the UK Foreign Office to stay onboard but register for an evacuation flight expected later this week.

A British couple on the ship - who had been giving regular updates to journalists via social media - confirmed on Wednesday they had tested positive for the virus.

The US, Canada, Australia and the UK will place all those released from the ship in another 14 days' quarantine when they return home.

Several experts have questioned the effectiveness of the quarantine measures on the Diamond Princess.

Kentaro Iwata, professor at the infectious diseases division of Japan's Kobe University, described the situation on board as "completely inadequate in terms of infection control".

After visiting the ship, Prof Iwata posted a video to YouTube stating that the quarantine measures he witnessed failed to separate the infected from the healthy.

The expert said he was more afraid of catching the virus on board than he had been working in the field in Africa during the Ebola epidemic and in China during the Sars (severe acute respiratory syndrome) outbreak.