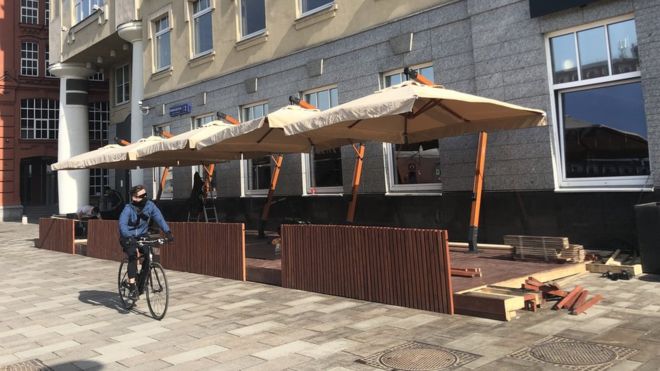 The Russian parliament has approved an â€œanti-virusâ€ package of laws including up to seven years in prison for serious violations of quarantine rules.

The tough laws and amendments were rushed through in record time, as regions across Russia followed Moscowâ€™s lead in imposing strict lockdowns, to slow the spread of coronavirus.

Russia has recorded its highest-yet rise in confirmed cases.

The official tally remains relatively low at 2,337 and 17 deaths.

That has led President Vladimir Putin to argue that Russia has valuable time to tackle the outbreak.

However, it emerged on Tuesday that the head of the main Moscow hospital treating patients with Covid-19 has tested positive.

Denis Protsenko gave Mr Putin a tour of the Kommunarka hospital a week ago, but the president's spokesman says there is no need to worry as he tested regularly.

The starkest amendment in the package of laws, with a seven-year prison sentence, will apply if someone with coronavirus breaks the quarantine and others die as a result.

There are also hefty fines for healthy people who simply violate the order to stay at home, and a potential new punishment of up to five years for spreading dangerous, fake news about the epidemic.
The government has been given the authority to declare an emergency situation and implement further new rules and restrictions as it sees fit.

There was no apparent debate of these measures in parliament, where the speaker announced that they had the support of all factions, as they were intended to â€œhelp and protectâ€ Russian citizens.

â€œThese amendments are preventative steps above all, and warning measures,â€ Duma Speaker Vyacheslav Volodin said. â€œThe health and lives of our nearest and dearest depend on how responsibly we all behave.â€

Since February, Russia has taken multiple steps to tackle Covid-19, including closing its long border with China and isolating early suspected cases.

But for a long time the official messaging remained that coronavirus was primarily a â€œforeignâ€ problem whilst Russia had the situation under tight control.

So when President Putin called for this to be a â€œnon-working weekâ€, his choice of phrase sent crowds of people heading for the southern coast instead of into self-isolation.

In Moscow on Saturday, the streets were quieter. But cafes and restaurants on the embankment were even building summer terraces, imagining that life would return to normal after one nationwide week off work.

So on Sunday night, Moscowâ€™s mayor announced a lockdown with immediate effect. Residents are only allowed out for essential work, to the nearest pharmacy, food shop or for a 100m (300ft) walk with their pet.

Officials plan to use phone tracking as well as a wide and sophisticated network of surveillance cameras to implement the quarantine and hold any rule-breakers to account.