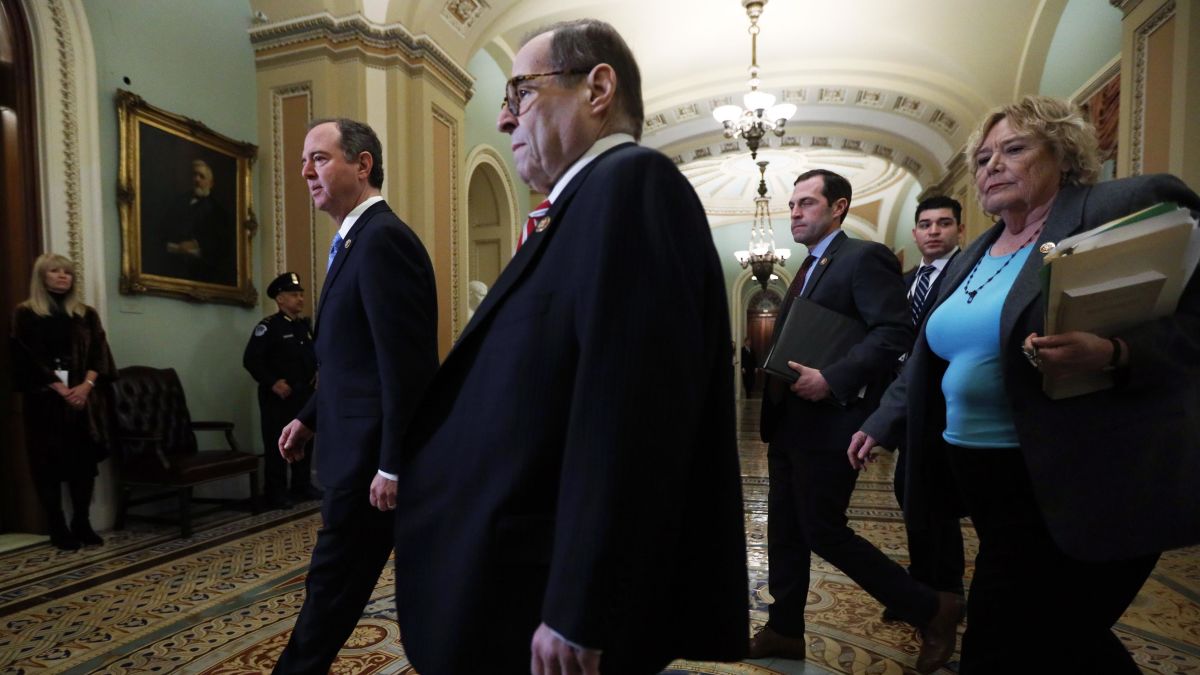 House Intelligence Chairman Adam Schiff gave his full-throated argument for removing President Donald Trump from office in the House's final uninterrupted pitch to Republican senators on the fence, urging the Senate to "give America a fair trial" with additional witnesses and documents.

Schiff delivered a 67-minute final address to wrap up the House's three-day case against the President, in which the California Democrat and lead impeachment manager argued the case that Trump abused his office and obstructed Congress was proven — and he urged senators to find the courage to go against what might be popular opinion in their states.

"One of the things that we in this fellowship of office-holders understand that most people don't is that real political courage doesn't come from disagreeing with our opponents, but from disagreeing with our friends. And with our own party," Schiff said. "What happens when our heartfelt views of right and wrong are in conflict with the popular opinion of our constituents? What happens when our devotion to our oaths, to our values, to our love of country, to part from the momentary passion from a large number of people back home?"

But after three days of arguments from the House managers, GOP sources in the Senate and White House say they are confident they will defeat a motion next week calling for a subpoena of witnesses and documents, arguing they have successfully kept their caucus in line amid the Democrats' opening arguments.

The White House and Senate Majority Leader Mitch McConnell have been laying the groundwork for weeks to lock down opposition to moving forward on new witnesses, including a lunch this week with former Attorney General Michael Mukasey who argued about the thorny legal issues ahead if Trump were to assert executive privileges for witnesses sought by Democrats.

If the vote fails to move forward on witnesses, the Senate could move to acquit Trump by the end of next week.

And two of the key Senate Republican votes, Susan Collins of Maine and Lisa Murkowski of Alaska, said they were upset that Schiff cited a CBS News report that Republican senators had been told "your head will be on a pike" if you vote against the President.
The comment that sparked an audible reaction from Republican senators in the chamber, and Collins shook her head and said, "That's not true."

"He was doing fine with moral courage until he got to the head on the pike. That's where he lost me," Murkowski said. "He was moving right along with the good oratory, and then he got to a couple places and it was just unnecessary."

Leaving the Capitol Friday, Collins said of witnesses: "I haven't heard the other half of the case yet. I tend to like information." Murkowski gave a similar argument that she's only heard from the House's team.

Senate Democrats praised Schiff and the other six impeachment managers for a powerful performance in laying out a meticulous case for impeaching and removing the President. Sen. Chris Coons, a Delaware Democrat, said that Schiff's comment was a "slight misstep of a few sentences in his closing," but added that it does "not effect the evidence, the case or its soundness."

Now the President's team gets its turn to detail Trump's defense, beginning with a three-hour session on Saturday, which will set the stage for a looming vote over witnesses that will occur after the senators get to ask questions of both sides. GOP Senate and White House sources are confident they will be able defeat the motion for additional witnesses and documents.

Democrats highlight McCain and Putin clips
Schiff and the other managers made a direct pitch to the senators throughout their three days of arguments, which concluded Friday with the case that Trump obstructed Congress in an unprecedented way by stonewalling the House's subpoenas.

They repeatedly played clips of the President's own words against him, and even showed an interview of the late Sen. John McCain -- an Arizona Republican beloved by many in the Senate chamber who famously clashed with Trump -- talking about the importance of Ukraine as a bulwark against Russia.

Schiff then showed Trump's news conference with Russian President Vladimir Putin in 2018 in which Trump talked about the Democratic National Committee server conspiracy, calling it an "intelligence coup" for Russia. "Why? Because a former Mayor of New York persuaded a President of the United States to sacrifice all of that for a cheap shot at his political opponent," he said.

"I think we have done a very good job of doing what the House managers asked to do. We are hearing the case eight or nine hours a day," said Sen. Lamar Alexander, a Tennessee Republican, one of the senators Democrats are looking toward. "We are going to hear the President's argument. We are going to listen to the answers to our questions, study the record and see if we need more evidence at the point. I'll make my decision after I hear all of that."

The House managers used video, quotes and tweets from Trump to bolster their case, including the President's attacks on witnesses who testified during the impeachment inquiry like Yovanovitch and Bill Taylor, who was the top US diplomat in Ukraine after Yovanovitch was ousted.

"President Trump's campaign of witness intimidation is reprehensible, debases the presidency and was part of his effort to obstruct the impeachment inquiry," said Rep. Val Demings, a Florida Democrat.

House Judiciary Chairman Jerry Nadler, a Democrat from New York, concluded his presentation about the President's defiance of subpoenas by calling Trump a "dictator."

"If he is permitted to defy the Congress, categorically, to say that subpoenas from Congress in an impeachment inquiry are nonsense, then we will have lost -- the House will have lost, the Senate certainly will have lost -- all power to hold any president accountable," Nadler said. "This is a determination by President Trump that he wants to be all powerful. He does not have to respect the Congress. He does not have to respect the representatives of the people. Only his will goes. He is a dictator. This must not stand."

Getting a head of Trump's team
For the second day, Democrats used their time to try to get ahead of arguments likely to come from the President's legal team. Democratic Rep. Jason Crow of Colorado opened the day Friday by pushing back on the expected defense about the withholding of US security aid.

"One defense you may hear is that the aid was held up to allow for a policy review. But the evidence shows the opposite," said Crow, one of two House freshmen on the House impeachment manager team. "The evidence shows the administration didn't conduct a review at any time after the President ordered the hold. ... No review was necessary because it had already been done."
Rep. Zoe Lofgren, a California Democrat, pointed for the second day to Sen. Lindsey Graham's comments two decades prior when he was an impeachment manager during the Bill Clinton impeachment, this time saying that the day President Richard Nixon failed to answer a congressional subpoena was "the day he was subject to impeachment."

Graham took a sip of water when Lofgren cited him, and nodded while she recited his quote, before leaning over to Republican Sen. Jerry Moran of Kansas and whispering something to him.

Schiff walked through all of the potential arguments he's expecting from the President's lawyers to kick off his closing, from an argument that the impeachment process was rigged against the President to unsubstantiated claims against the Bidens in Ukraine.
The House managers' presentation has been detailed and thorough across the three days they've spoken. Republican senators have derided it as repetitive, but the managers are making a pitch to the public as well as Republican senators they hope will consider backing subpoenas for witnesses and documents.

"I've been saying throughout, he's been arguing for the public for 24 hours, because they've been repeating again and again," said Sen. John Barrasso, a Wyoming Republican.

Trump's team starts Saturday
On Thursday, Democrats pushed back on the notion there's any legitimacy to investigating former Vice President Joe Biden in Ukraine, as the President and his personal attorney Rudy Giuliani have claimed. Trump attorney Jay Sekulow, however, suggested their focus on the Bidens "kind of opened the door for that response" from the defense team.

The President's lawyers will begin their arguments Saturday, and the trial is starting earlier, at 10 a.m. ET. Sekulow said they will go until about 1 p.m. ET, wrapping up early and giving senators a chance to go home -- or to campaign in Iowa -- for the rest of the weekend before resuming Monday. Republicans don't expect the President's team to use the full 24 hours allotted to them.
Sekulow said that Saturday's session would be a "sneak preview" of the case they will detail next week.
Trump complained about the start date on Twitter Friday morning, suggesting that the Saturday session would get bad TV ratings, calling Saturday "Death Valley in T.V."

Of course, it's been Senate Majority Leader Mitch McConnell who has set the schedule, including the late night for amendment votes to set the trial rules and cutting the number of days each side has to use their 24 hours of arguments to three from four in the 1999 Clinton impeachment trial. McConnell's condensed schedule is part of an effort to end the trial next week — ahead of the President's February 4 State of the Union.

Whenever the President's lawyers conclude their presentation, the Senate will shift into 16 hours of senator questions of the two legal teams. Then the Senate will address the question of witnesses — with a vote looming under the Republican-passed trial rules on whether there should be subpoenas for additional witnesses and documents.

Republicans have picked up on an argument from McConnell that pursuing witnesses such as Mulvaney and Bolton would result in prickly, problematic legal issues if the President invokes executive privilege -- and that it could tie up the trial for weeks or months in the courts.

But Schiff pushed back that argument Friday, saying that Supreme Court Chief Justice John Roberts, who is presiding over the trial, would be able to make decisions about evidence and privilege.

"We have a very capable justice, sitting in that Senate chamber, empowered by the Senate rules to decide issues of evidence and privilege. And so if any of these witnesses have a colorable claim that they wish to make or the President on their behalf, we have a justice who is able to make those determinations, and we trust that the chief justice can do so," Schiff told reporters. "Unlike in the House, where the President could play rope a dope in the courts for years, that is not an option for the President's team here, and it gives no refuge to people who want to hide behind executive privilege to avoid the truth coming out."

According to the latest survey by Afrobarometer, more than eight in 10…

Black Stars Head Coach, Charles Kwabla Akunnor has arrived in the country after…

Support fight against misinformation to preserve our democracy - Oppong Nkrumah

The Minister for Information, Kojo Oppong Nkrumah has charged media…