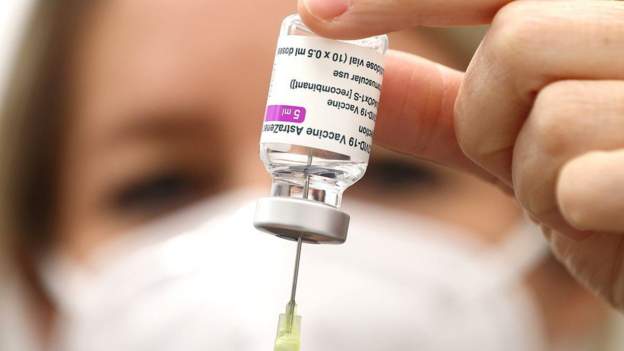 Denmark has ceased giving the Oxford-AstraZeneca Covid vaccine amid concerns about rare cases of blood clots, the first European country to do so fully.

The move is expected to delay the country's vaccination programme by several weeks.

Drug watchdog the European Medicines Agency last week announced a possible link with clots but said the risk of dying of Covid-19 was much greater.

Most have now resumed vaccinations with AstraZeneca, but often with limits to older age groups.

On Tuesday, the US, Canada and the European Union paused the Johnson & Johnson vaccine for similar reasons over clotting.

South Africa has also paused its use, despite the Johnson & Johnson being its preferred vaccine because of its effectiveness against the South African variant.

For both AstraZeneca and Johnson & Johnson, the blood clot side effects are extremely rare.

Why is Denmark stopping the AZ vaccine?
Danish officials said that all 2.4 million doses of the AstraZeneca vaccine would be withdrawn until further notice.

The Danish Health Authority said studies had shown a higher than expected frequency of blood clots following doses, affecting about one in 40,000 people.

It comes after two cases of thrombosis in Denmark were linked to vaccinations, AFP reported. One of the cases, in a 60-year-old woman, was fatal.

Director General Soren Brostrom said it had been a "difficult decision" but Denmark had other vaccines available and the epidemic there was currently under control.

"The upcoming target groups for vaccination are less likely to become severely ill from Covid-19," he said. "We must weigh this against the fact that we now have a known risk of severe adverse effects from vaccination with AstraZeneca, even if the risk in absolute terms is slight."

However, the authority said it could not rule out using it again at another time.

During the press conference the head of Denmark's Medicines Agency, Tanja Erichsen, fainted and was taken to hospital as a precaution. The agency later tweeted that she had recovered.

Almost one million people in Denmark have been vaccinated, with approximately 150,000 of them receiving the AstraZeneca jab. The Pfizer/BioNTech and Moderna vaccines are also in use.

How do adenovirus vaccines work?
Adenoviruses are found in humans and other animals. Scientists use a modified version of one of these adenoviruses, known as a vector, to deliver important instructions to cells, according to the US Centers for Disease Control (CDC).

They work by entering cells and using the cell's machinery to produce a harmless piece of the virus that causes Covid-19, known as a spike protein. The cell then recognises that the spike protein does not belong there and this triggers the immune system to fight back against what it thinks is an infection.

This process allows our bodies to learn how to protect us against Covid-19, according to the CDC.

Regulators are now investigating whether an unusual immune response to the adenovirus vaccines is causing the rare but severe incidences of blood clotting.

An official from the US Food and Drug Administration told Reuters it was "plainly obvious" that the cases of blood clots linked to the Johnson & Johnson vaccine were "very similar" to those linked to the AstraZeneca vaccine.

What are other countries doing?
Some European countries have limited the use of adenovirus vaccines to older people, who have been less affected by the rare blood clotting condition.

After the Danish announcement, France said it viewed the AstraZeneca vaccine as an "essential tool".

"It is important that this vaccine continue to be deployed. It is a vaccine that is safe and works," a French government spokesman said.

France will also go ahead with plans to give the Johnson & Johnson vaccine to those aged over 55, the spokesman said. The country has already received 200,000 doses. Belgium will also give the doses it has received, while Greece and Italy will not.

Meanwhile the Czech Deputy Prime Minister Jan Hamacek said he had instructed the Czech ambassador in Denmark to try to buy the 2.4 million AstraZeneca vaccines doses that the Danes would no longer be using.

Mr Hamacek said he would also travel to Moscow to arrange deliveries of the Russian Sputnik V vaccine - another adenovirus vaccine - once its use is approved by the EMA.

Denmark was the first country to postpone use of the AstraZeneca vaccine in March. It was followed by numerous other European countries.

More Pfizer-BioNTech doses for the EU
In a separate development, the European Commission said Pfizer-BioNTech would deliver an extra 50 million doses to the EU in the next few weeks.

The Pfizer-BioNTech is an RNA vaccine - a new type of vaccine that uses genetic material to teach cells how to make copies of the virus causing Covid-19, triggering an immune response.

Commission President Ursula von de Leyen also said the EU was discussing a new deal with Pfizer-BioNTech to deliver 1.8 billion doses in 2022 and 2023 which would all be produced within the EU.

So far 27 million people in the EU have been fully vaccinated.