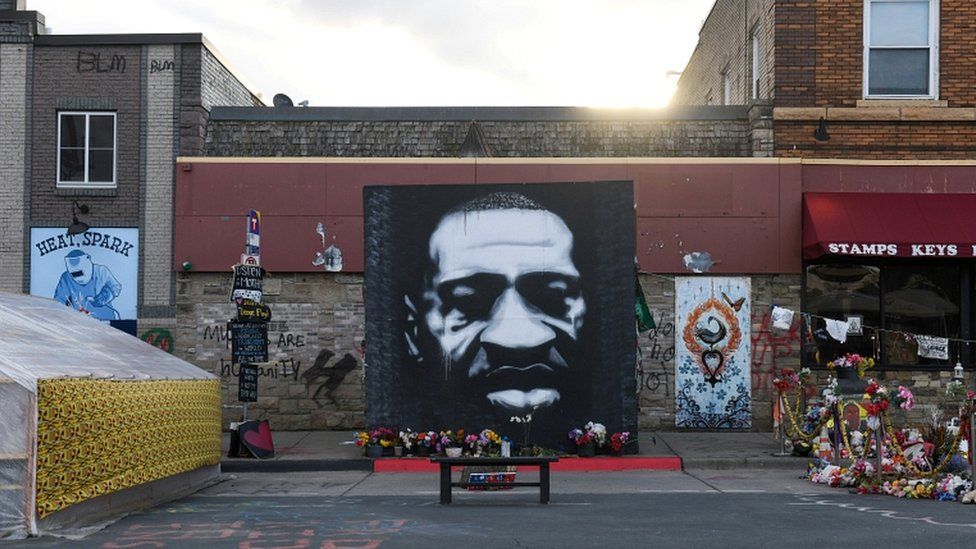 A witness has told of the last harrowing minutes of George Floyd's life on the opening day of the trial of Derek Chauvin, the white American policeman accused of killing him.

Donald Williams III, a witness for the prosecution, said Mr Floyd was "slowly fading away" during the nine minutes Mr Chauvin kneeled on his back and neck.

Mr Chauvin's lawyer argued his use of force was "unattractive but necessary".

This trial is being seen by many as a pivotal moment in US race relations.

The May 2020 incident - in which Mr Chauvin was captured on video kneeling on the neck of Mr Floyd, a black man, in the city of Minneapolis - sparked protests in the US and across the world against police brutality and racism.

Mr Chauvin, 45, who was dismissed from the police, denies murder and manslaughter charges, which carry sentences of up to 40 years in prison.

Three other officers present - Tou Thao, J Alexander Keung and Thomas Lane - will go on trial later in the year.

What was heard on the first day of the trial?
Donald Williams, a 33-year-old entrepreneur, said he had been planning to enter the Cup Foods shop, in Minneapolis, Minnesota, when he witnessed the arrest of Mr Floyd on 25 May 2020.

He said he decided against entering the shop because "the energy was off", and instead began a conversation with the arresting police officers and urged them to check Mr Floyd's pulse.

He told the court he could see Mr Floyd's life slipping away. "He's slowly fading away like a fish in a bag," he said. "His eyes slowly rolled to the back of his head" until "he didn't have no life in him no more in his body".

At the start of the trial, prosecutors began by showing the nine-minute long videotape, shot by one of the bystanders, that showed Mr Chauvin kneeling on 46-year-old Mr Floyd.

Prosecutor Jerry Blackwell told jurors that Mr Floyd said 27 times that he could not breathe.

The tape proves Mr Chauvin was "engaging in behaviour that was imminently dangerous... without regard for its impact on the body of George Floyd," Mr Blackwell said.

Defence lawyer Eric Nelson, in his opening statements, said that the evidence "is far greater than nine minutes and 29 seconds" of video footage.

He said the evidence would show Mr Floyd "died of a cardiac arrhythmia, that occurred as a result of hypertension, coronary disease, the ingestion of methamphetamine and fentanyl, and adrenaline flowing through his body".

The court also heard testimony from 911 police despatcher Jena Scurry, who deployed police to the Cup Foods shop after George Floyd was reported for allegedly using a counterfeit $20 bill.

A camera fixed on the side of the building allowed her to watch the arrest unfold. She admitted her viewing had been sporadic as she fielded other calls, but told jurors that she thought the "screens had frozen" because of the length of time Mr Floyd was kept on the ground and became "concerned that something might be wrong".

The court also heard from one of those who filmed the incident, Alisha Oyler, who had been working in a nearby shop.

Before the trial began, Mr Floyd's family, civil rights lawyers and activists knelt outside the courthouse for the length of time Mr Chauvin kept his knee on Mr Floyd's neck.

What more do we know of the trial?
Fifteen jurors - nine women and six men - were originally selected; nine of them white and six black or multiracial.

One juror - who was a back-up option in case a juror dropped out before proceedings began - was dismissed on Monday, and the trial began with 12 jurors and two alternates.

They will remain anonymous and unseen throughout the televised trial, which is expected to last about four weeks.

The courthouse in central Minneapolis has been fortified with concrete barriers, fencing, and barbed and razor wire.

Why is this such a high-profile case?
The video footage of Derek Chauvin kneeling on George Floyd's neck last May was replayed the world over.

To many, Floyd's death while in police custody became a vivid symbol of police brutality - particularly against people of colour - and it sparked worldwide demonstrations for racial justice.

But despite the global outcry this is not an open and shut case. In the US, police are rarely convicted for deaths that occur while they are on duty, if they are charged at all.

The verdict in this case will be widely seen as an indication of how the US legal system treats deaths that occur while in police custody.