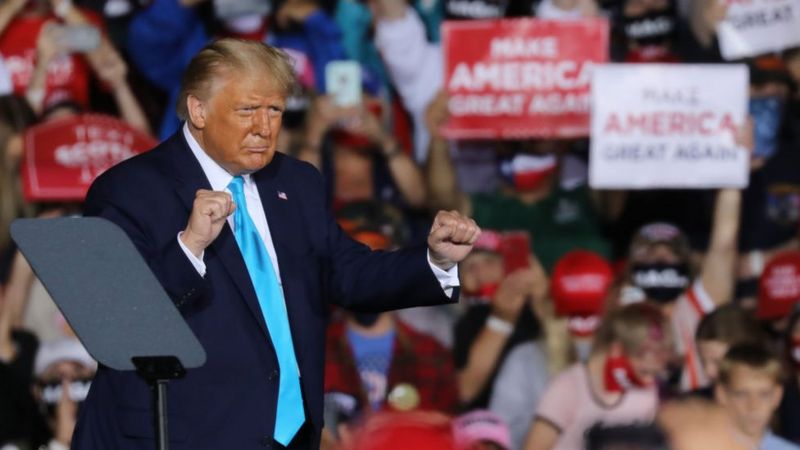 The New York Times says Donald Trump paid just $750 (Â£587) in federal income tax both in 2016, the year he ran for the US presidency, and in his first year in the White House.

The newspaper - which says it obtained tax records for Mr Trump and his companies over two decades - also alleges that he paid no income taxes at all in 10 of the previous 15 years.

The records reveal "chronic losses and years of tax avoidance", it says.

"Actually I paid tax. And you'll see that as soon as my tax returns - it's under audit, they've been under audit for a long time," he told reporters after the story was published on Sunday.

Mr Trump has faced legal challenges for refusing to share documents concerning his fortune and business. He is the first president since the 1970s not to make his tax returns public, though this is not required by law.

The Times said information in its report was "provided by sources with legal access to it".

What are the key claims?

The Times said it reviewed tax returns relating to President Trump and the companies owned by the Trump Organization going back to the 1990s, as well as his personal returns for 2016 and 2017.

It said the president paid just $750 in income taxes in both 2016 and 2017, while he paid no income taxes at all in 10 of the previous 15 years, "largely because he reported losing much more money than he made".

Before becoming president, Mr Trump was known as a celebrity businessman and property mogul.

But the newspaper says his reports to the IRS "portray a businessman who takes in hundreds of millions of dollars a year yet racks up chronic losses that he aggressively employs to avoid paying taxes".

In a public filing, President Trump said he made at least $434.9m in 2018. The newspaper disputes this, alleging that his tax returns show the president had instead gone into the red, with $47.4m in losses.

The Trump Organization joined the president in denying the allegations in the report.
The company's chief legal officer, Alan Garten, told the Times that "most, if not all, of the facts appear to be inaccurate".

What else does the report say?

The newspaper also claims that "most" of Mr Trump's biggest businesses - such as his golf courses and hotels - "report losing millions, if not tens of millions, of dollars year after year".

"That equation is a key element of the alchemy of Mr Trump's finances: using the proceeds of his celebrity to purchase and prop up risky businesses, then wielding their losses to avoid taxes," it says.

It adds that the president is personally responsible for more than $300m in loans, which will come due in the next four years.

The newspaper also alleges that some of President Trump's businesses have received money from "lobbyists, foreign officials and others seeking face time, access or favour" from the president.

The Times says it used tax records to find out how much income the president makes from his companies overseas, alleging that he made $73m in revenue from abroad in his first two years at the White House.

Much of that came from his golf courses in Ireland and Scotland, but the Times says the Trump Organization also received money "from licensing deals in countries with authoritarian-leaning leaders or thorny geopolitics".

The Times alleges that the licensing deals netted $3m from the Philippines, $2.3m from India and $1m from Turkey.

The newspaper claims that President Trump made $427.4m in 2018 in revenues from The Apprentice US series, as well as from branding deals where organisations paid to use his name. He also made $176.5m by investing in two office buildings that year, it is alleged.

However, the Times alleges that the president paid almost no taxes on these revenues, because he reported that his businesses made significant losses.

It also claims that President Trump has been making use of a tax code that enables business owners to "carry forward leftover losses to reduce taxes in future years".

For example, the newspaper says that in 2018, President Trump's largest golf resort, Trump National Doral, near Miami, made $162.3m in losses. Similarly, his two golf courses in Scotland and one in Ireland, reported a combined $63.6m in losses, it is alleged.

What has the reaction been?

House Speaker Nancy Pelosi, the most powerful Democrat in Washington, said the report showed Mr Trump had taken "extraordinary measures" to "game the tax code and avoid paying his fair share of taxes".

Taking to Twitter, Senate minority leader Chuck Schumer asked Americans to raise their hands if they had paid more in federal income tax than Mr Trump.

Democratic presidential candidate Joe Biden has not commented so far, but his campaign team highlighted on Twitter that teachers, firefighters and nurses all paid much more than $750 in tax.