Donald Trump: What we learned from his rally in Pennsylvania 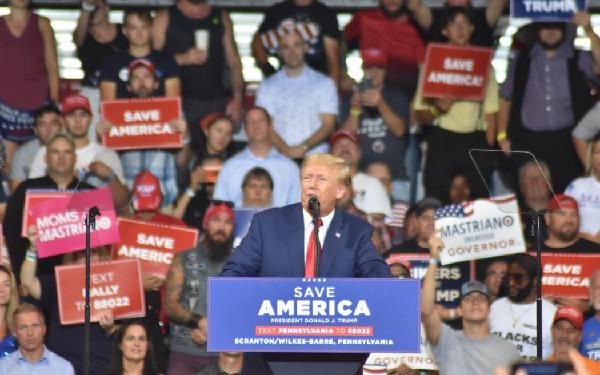 Donald Trump has called President Joe Biden an "enemy of the state" at his first rally since the FBI searched his Florida resort for sensitive files.

Speaking to thousands of supporters in Wilkes-Barre, Pennsylvania, the ex-president accused Mr Biden of weaponising the FBI against him.

The raid was "one of the most shocking abuses of power by any administration in American history", Mr Trump claimed.

He was in the state to promote two Republican candidates.

Dr Mehmet Oz is running for the US Senate, and state Senator Doug Mastriano is in the race to become Pennsylvania's next governor.

Both spoke only briefly - as always, the rally on Saturday night was really about one person: the headliner.

FBI agents conducting the search found dozens of empty folders marked as classified, and top secret files were recovered from his personal office.

Mr Trump, who is being investigated over his handling of classified records, denies wrongdoing.

Apart from the raid, the former president returned to familiar themes at the Pennsylvania rally: false claims that the 2020 election was stolen from him, attacks on rivals in the Democratic Party, and promises to "save our country".

Several times, he called for people who deal drugs to receive the death penalty.

Here are four key things you need to know about Donald Trump's rally.

Punching back at the Department of Justice (DoJ)

The former president is currently involved in a legal tussle with federal authorities over a cache of classified documents that the FBI seized last month.

Federal prosecutors now say he may have obstructed the investigation into his possession of the documents.

Mr Trump has previously spun investigations and attacks against him as "witch hunts", and it was no different on Saturday.

He came out swinging, calling the FBI's search "the shameful raid and break-in on my home in Mar-a-Lago" a "travesty".

The former president has long built his appeal by casting himself and his supporters as political outsiders and persecuted figures.

Mr Trump linked his personal legal troubles to his supporters' political frustrations, claiming: "We are being assaulted… by the FBI and DOJ."

"It was not just my home that was raided… it was the hopes and dreams of every citizen who I've been fighting for since the moment I came down the golden escalator in 2015, wanting to represent the people," he added, drawing boos from the crowd.

Supporters think Trump was 'set up'

The crowd was on his side when it came to the FBI's search.

This region supported Mr Trump in the 2020 election, even though Pennsylvania overall slipped from his grasp and chose Mr Biden.

Two supporters had already procured "Defund the FBI" T-shirts to wear to the rally.

Gail McCloskey, from the city of Altoona, nearly a three-hour drive away, told the BBC she thought the FBI visit was "a set up".

Meanwhile, Kelly Borgogelli, 60, who had driven four hours from Buffalo, New York, to see Mr Trump, said: "They're just going after him for pure hate."

Asked if she believed any of the multiple accusations made against Mr Trump over the years - that he incited a violent mob to storm the US Capitol last year, that he improperly pressured Ukraine's president to investigate his political enemies, or that he falsified claims of election fraud in 2020 - Mrs Borgogelli replied she did not.

"They've never given us any proof," she said.

Her companion, Maureen Ewart, 62, said if the justice department actually charged Mr Trump, the country would be "divided".

"It will be crowded out there, the streets will be full," Ms Ewart said, emphasising that she did not condone violence - but feared any criminal charges against the former president could spark civil unrest.

At one point, Mr Trump himself claimed that the latest investigation into his possession of government documents was "going to produce a backlash" the likes of which the country had not seen before.

His visit to Pennsylvania is a strategic choice

Mr Trump's name might not be on the ballot in Pennsylvania this year, but Trumpism certainly is.

Their performance in the November election will be seen as a referendum on the strength of Mr Trump's endorsement, and the political ideologies he's unleashed on the Republican Party.

The outcome could have ramifications for 2024.

Mr Trump has not announced another presidential campaign, but has left the door wide open.

Should his candidates prevail, the Republican Party will see it as a sign of Mr Trump's continued dominance of their base voters.

Should they lose, however, it could indicate to Mr Trump's potential 2024 rivals that they may have a chance at the White House after all.

Rallygoers were far more enthused about Mr Mastriano - a candidate more closely forged in the former president's mould - than they were about Dr Oz.

The crowd roared when Mr Mastriano was brought onstage. However Dr Oz was invited to join Mr Trump onstage well over an hour into the rally.

The celebrity doctor spoke for less than two minutes, and after his remarks, someone in the back of the crowd shouted "he's a Rino!" or "Republican in name only", a criticism that Dr Oz is not sufficiently conservative.

The state is vital to Democrats' hopes as well. They want to pick up a US Senate seat by propelling Lt Gov John Fetterman to victory.

The governor's race has taken on extra significance with Mr Mastriano's landslide win in the Republican primary. He attended the 6 January 2021 attack on the US Congress and played a key role in efforts to overturn the 2020 election results in Pennsylvania.

Should he win the governorship, he would have significant power over the state's election implementation.

To oppose him, Democrats have put forth the state's attorney general, Josh Shapiro, and President Biden held several high-profile events in the state in recent days to help whip up the Democratic base.

In fact, he also visited Wilkes-Barre, on 30 August to give a major speech about guns and public safety and two days ago he gave a primetime address in Philadelphia.

He argued that Trump's ideology - which he called "Maga Republicans" after his predecessor's famous campaign slogan - threatened American democracy.

"But there's no question the Republican Party today is dominated, driven and intimidated by Donald Trump and the Maga Republicans, and that is a threat to this country."

On Saturday, Mr Trump called Mr Biden's address the most "vicious hateful and divisive speech ever delivered by an American president".