Gay couple beaten on London bus for refusing to kiss 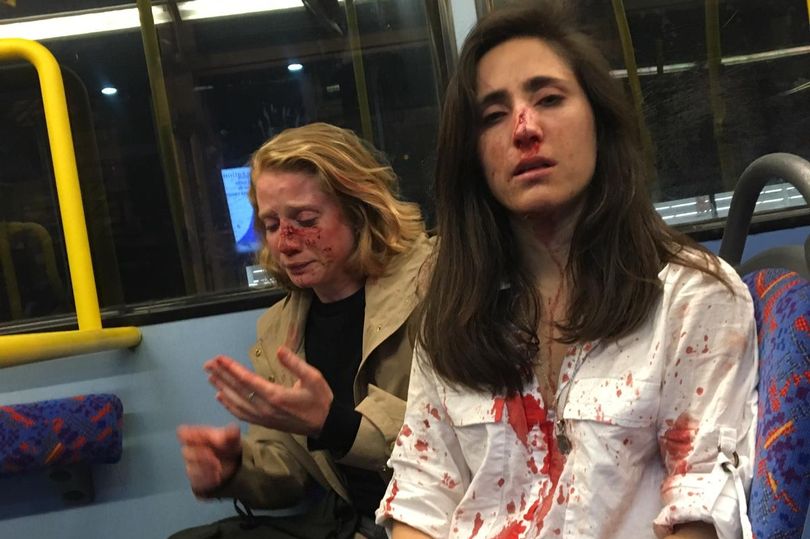 Ryanair stewardess and her girlfriend who were left bloodied following an alleged homophobic attack on a London bus say they are 'not scared about being visibly queer'.

Melania Geymonat, 28, from Uruguay, and partner Chris, 29, from USA, claimed they were attacked by a gang of young men who allegedly demanded they kiss each other.

The group allegedly threw things at them and started to beat the pair, who was left with facial injuries on the bus in West Hampstead, London.

Melania and Chris also claimed the gang stole a phone and a purse before fleeing the bus.

Four teenagers aged between 15 and 18 have been arrested on suspicion of committing aggravated grievous bodily harm and robbery.

Asked if they will show less affection in public, Chris told the BBC: "I am not scared about being visibly queer. If anything, you should do it more.

I was and still am angry. It was scary, but this is not a novel situation."

Her partner Melania, who lives in Bishop's Stortford in Essex, agreed and believed the alleged attack was directed at them only because they are 'women who are dating each other, but also because we are women'.

According to the Met Police's crime dashboard, the reported homophobic hate crimes across London have increased from 1,488 in 2014 to 2,308 in 2018.

Detective Superintendent Andy Cox said: “This was a disgusting attack on two women who appear to have been picked out and targeted by a group of youths.

"The suspects have made a number of homophobic comments towards the couple before throwing coins at them. When the women tried to reason with the group, the attack escalated to an assault.

"Attacks of this nature on London buses are rare. I would like to reassure those heading out over the weekend that extra uniformed and plain clothes Safer Transport officers will be out on patrol working to keep them safe and prevent crime."

Prime Minister Theresa May and Labour leader Jeremy Corbyn both condemned the attack.

Mrs May said: "This was a sickening attack and my thoughts are with the couple affected.

"Nobody should ever have to hide who they are or who they love and we must work together to eradicate unacceptable violence towards the LGBT community."

And Mr Corbyn said: "We must not, and will not, accept this homophobic and misogynist violence in our society.

"Solidarity to Melania and Chris, and to all in the LGBT+ community for everything they endure for simply being who they are."

He tweeted: "This was a disgusting, misogynistic attack. Hate crimes against LGBT+ people will not be tolerated in London."