Half of Somalia's population hungry as drought bites 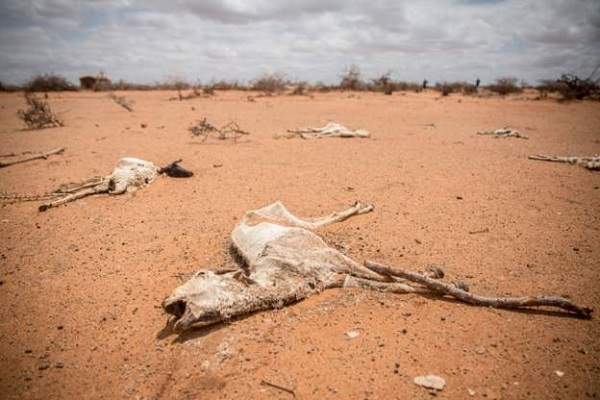 Somalia is facing the worst drought in a decade
Shares

The worst drought in four decades is raging through the Horn of Africa.

The World Food Programme says up to 20 million people in Kenya, Ethiopia and Somalia are at risk of starvation by the end of the year.

Somalia is bearing the brunt with half of the population now hungry.

Hundreds of thousands of people are abandoning their homes in rural Somalia and heading to camps for the internally displaced.

Their fields are bare, crops have failed, and dead livestock are strewn along the roads. This is the worst drought in the last decade according to experts, and famine is looming.

There are thousands of children who are unaccompanied in the camps. Older siblings have taken the role of care givers, as their fathers have gone to towns to look for food, and the mothers are stuck in hospitals where the rate of severe malnutrition is at an all-time high.

Deaths are now being reported. In one centre in Baidoa, at least 26 children died between May and June, according to records.

"Some of the girls I used to play with are still alive. Some died, while others have moved to the capital city Mogadishu where they work as house helps," 13-year-old Fardhosa tells the BBC in a makeshift hut at the camp in Baidoa.

The charity Save the Children says they are seeing an increase in psychosocial stress among children and their care givers.