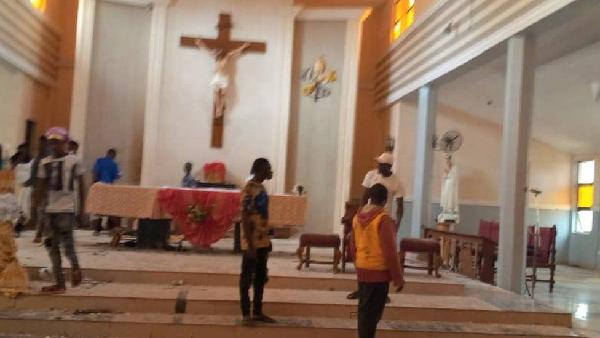 Police in Nigeria say gunmen who killed more than 20 people in a church on Sunday had disguised themselves as worshippers.

A spokesman said the attackers detonated explosives inside the building, while others outside opened fire.

It still isn't clear why they carried out the assault in the south-western town of Owo.

Police are also yet to announce an official number of deaths.

The UN in Nigeria said it "strongly condemns the brutal attacks on worshippers", according to a statement by the UN secretary general's spokesman on behalf of the UN's Resident Coordinator for Nigeria, Mattias Schmale.

Mr Schmale appealed for calm and called for the attack perpetrators to be brought to justice.

The attack overshadowed a meeting of Nigeria's governing party, which has begun the process of choosing a candidate for next year's presidential election.