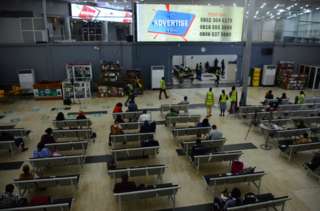 The authorities in Nigeria say they are expecting to receive at least 38 Nigerians who are being deported from the United Kingdom.

The deportees include members of LGBTQ+ communities who had sought asylum in the UK.

Others are mothers, grandmothers and people who had lived in the UK for decades.

They are scheduled to arrive in Lagos early on Thursday morning on a controversial Home Office charter flight.

There are indications some Ghanaian nationals who are also being deported might be on the flight.

Nigeria’s foreign affairs ministry told the BBC that the affected persons are being sent back to the country due to immigration-related offences.

Human rights campaigners in the UK say they are concerned about the welfare of the deportees.

They say about 10 women among the deportees are suffering from severe mental health problems and are on anti-psychotic medication.

Campaigners believe some of the affected persons could face persecution - either because of their religion or on the basis of their sexual orientation.

On Wednesday protesters gathered in County Durham in north-east England to demand that they remain in Britain.