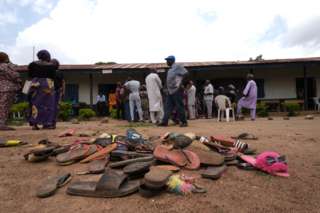 The Nigerian senate has passed a bill imposing jail terms of at least 15 years on anyone paying a ransom to free someone who has been kidnapped.

Critics say the move is unfair as it criminalises people who are desperate to free their relatives.

The new law will also provide the death penalty or life in prison for anyone found guilty of kidnapping.

For more than a decade, Nigeria has been struggling to deal with a deadly wave of kidnappings for ransom by armed groups.

The bill needs to be debated and passed by the lower house before the president signs it into law - a process that could take weeks or months.