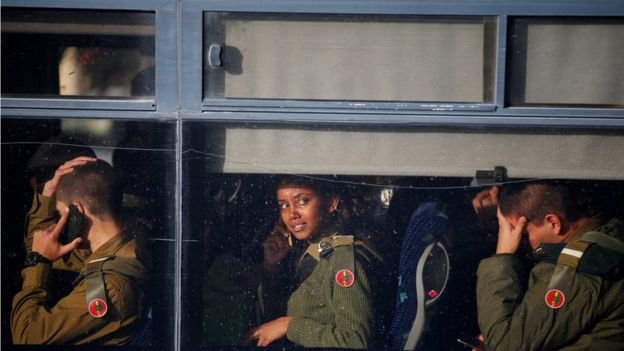 Four people have been killed in Jerusalem by a Palestinian who rammed a lorry into a group of soldiers, in what police say was a terrorist attack.

Three women and one man, all in their twenties, were killed and at least 13 more were wounded, police said.

Israeli Prime Minister Benjamin Netanyahu said the attacker, who was shot dead by soldiers, was a suspected supporter of so-called Islamic State.

The prime minister's office gave no details on what led to the finding.

Israel's police chief Roni Alsheich said the attacker, who has been identified by police, was a Palestinian from East Jerusalem.

CCTV footage showed the man driving the truck off the road and ploughing at high speed into the soldiers, before reversing over the victims.

Police spokesman Micky Rosenfeld said security had been heightened throughout the city in response.

Jerusalem Mayor Nir Barkat called on residents not to "let terror win" and said militants would "pay a heavy price".

"There is no limit to the cruelty of the terrorists who are willing to use any means possible to murder Jews and to damage the life routine of Israel's capital," he said.

The Palestinian militant group Hamas praised the attacker, according to the Associated Press. Hamas spokesman Abdul-Latif Qanou called it a "heroic" act and encouraged other Palestinians to "escalate the resistance".

Before this latest incident, 35 Israelis had been killed in a wave of knife, gun and car-ramming attacks by Palestinians or Israeli Arabs since October 2015.

More than 200 Palestinians - mostly attackers, Israel says - have also been killed in that period.

Israel says Palestinian incitement has fuelled the attacks. The Palestinian leadership has blamed frustration rooted in decades of Israeli occupation.

The BBC's Yolande Knell in Jerusalem says the number of attacks had begun to subside in recent months, but Sunday's incident is one of the most serious there has been.