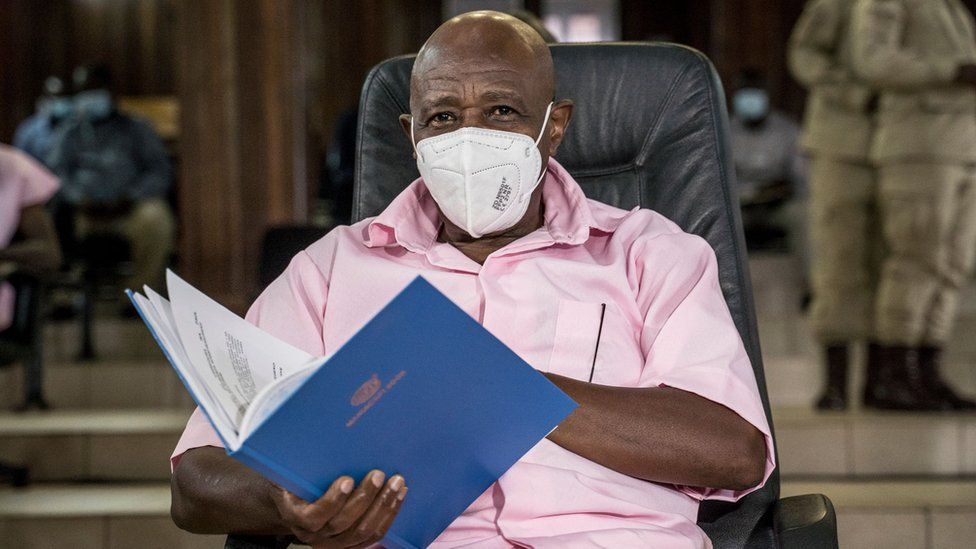 The family of Paul Rusesabagina, the subject of Oscar-nominated film Hotel Rwanda, have filed a $400m (£307m) lawsuit in the United States over his alleged abduction and torture.

He was sentenced to 25 years for terrorism by a Rwandan court last year in what supporters called a sham trial.

His family say the Rwandan government lured him from Texas, where he was living in exile, back to Rwanda.

He is credited with saving some 1,200 people during the 1994 genocide.

In a statement, Rusesabagina's family accused the Rwandan government and high-ranking officials of conspiring to "facilitate and execute an elaborate plot to lure" Rusesabagina from his home in San Antonio to Rwanda "where he would be tortured and illegally detained for the remainder of his life".

The statement added that the $400m sought in compensation will "grow every day that Paul Rusesabagina is held in captivity".

The complaint was filed in Washington DC, the statement said, and has been served on the government of Rwanda, which has not yet commented publicly, nor responded to the BBC's request for comment.

The Rwandan genocide lasted 100 days from April 1994, when 800,000 people, mostly from the Tutsi ethnic group, were slaughtered by extremists from the Hutu community.

Rusesabagina - a hotel manager at the time - protected some 1,200 people from the violence, after they sought shelter in the building. The Hollywood film, Hotel Rwanda, was made in 2004, and featured Don Cheadle as Rusesabagina.

The following year he was awarded the Presidential Medal of Freedom by then-US President George W Bush for his efforts.

But Rusesabagina's journey from celebrated humanitarian to Rwandan state enemy happened as his criticism of the post-genocide government and President Paul Kagame gained a wider audience.

In a 2018 video message, Rusesabagina called for a regime change, saying that "the time has come for us to use any means possible to bring about change in Rwanda".

He was arrested in 2020, when, according to his supporters, a private jet he believed would take him to Burundi, instead landed in the Rwandan capital Kigali. In September last year he was found guilty of backing a rebel group behind deadly attacks in 2018 and 2019 in Rwanda.

At the time, the US, where Rusesabagina is a resident, said it was concerned by the conviction.