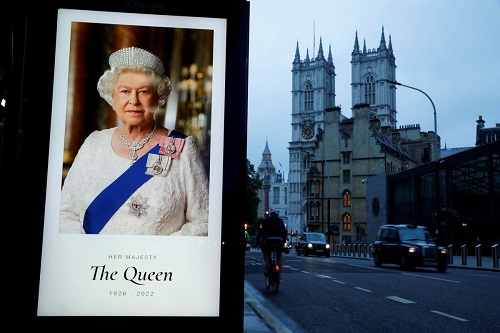 Heads of state travelling to the UK for Queen Elizabeth II’s funeral will be forbidden from travelling in private jets and helicopters, according to leaked guidance.

Foreign dignitaries and their spouses have been asked to travel to Britain on commercial flights, according to Foreign Office guidance seen by Politico.

READ ALSO: Charles praises Queen's reign as he is formally confirmed as king

Only heads of state and their partners will be invited to the ceremony, according to the guidelines. It is not clear if former heads of state will receive an invitation.

In the document, sent to overseas embassies late on Saturday night, the department said it “regrets that, because of limited space at the state funeral service and associated events, no other members of the principal guest’s family, staff or entourage may be admitted”.

The document reportedly warns leaders restrictions could be imposed on their use of official cars.

The reported plans emerged after CNN reported that Joe Biden was facing a dilemma over whether to invite Donald Trump to join him at the funeral.

According to the network, Mr Trump’s attendance was in his successor’s hands.

The logistics of having to decide whether Mr Trump would join him in crossing the Atlantic on Air Force One would be problematic for Mr Biden, given that his predecessor still refuses to accept the result of the 2020 election.

On Sunday, President Joe Biden paid a further tribute to the Queen as he remembered the victims of the September 11 terrorist attacks on the US

“It’s a weird idea. If we were talking about a normal president, it would be a very uncontroversial thing to do,” said Christopher Galdieri, associate professor at Saint Anselm College in New Hampshire.

“Former presidents are really useful for this sort of thing. They represent the country and if you send, say, Bill Clinton and George W Bush, you’ve got a nonpartisan delegation.

“In the 1980s, it was not uncommon for Nixon, Ford and Carter to attend these types of events on behalf of the Reagan administration.

“But with Trump, we aren’t talking about somebody who lost an election and handed over the keys to the White House and co-operated with the transition.

“He is someone who summoned a mob to storm the Capitol.

“He is in tremendous legal jeopardy with the Mar-a-Lago documents, Georgia and the civil litigation. It’s mind-boggling to think of him as an appropriate person for this sort of event.”

However, Jeff Lord, who was associate political director in Ronald Reagan’s White House, disagreed. “Everyone should be coming together to pay respects,” said Mr Lord.

“It would be a win for Joe Biden to ask for former presidents to go, Trump included.”

“Spending time with Her Majesty was one of the most extraordinary honours of my life,” he said.

However, as recently as April, Mr Trump launched a blistering attack on the Duke and Duchess of Sussex, calling the Duke of Sussex the “most whipped man in the world”.

It is unclear whether Mr Trump has sought an invitation to the funeral. The Telegraph has approached his office for clarification.

The final decision rests with Mr Biden, who on Sunday paid a further tribute to the Queen as he remembered the victims of the Sept 11 terrorist attacks on the US.

He recalled her message as America mourned the death of nearly 3,000 people. “Grief is the price we pay for love,” she told him.