Charles praises Queen's reign as he is formally confirmed as king 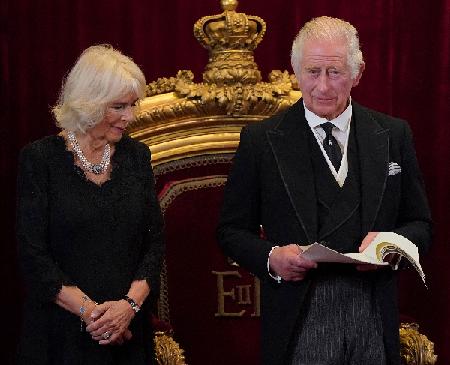 Charles III has praised the Queen's "unequalled reign" after being proclaimed king at a ceremony at St James's Palace.

King Charles became the monarch after the death of his mother, but a meeting formally confirmed it on Saturday.

He also approved the day of the Queen's funeral being a bank holiday, though it is not known what date this will be.

Speaking before the Accession Council, the King said his mother's death had been an "irreparable loss".

He went on: "It is the greatest consolation to me to know of the sympathy expressed by so many to my sister and brothers and that such overwhelming affection and support should be extended to our whole family in our loss."

He later spoke of the Queen's "selfless service", saying: "My mother's reign was unequalled in its duration, its dedication and its devotion.

"Even as we grieve, we give thanks for this most faithful life."

The King added he would "strive to follow the inspiring example" he was set by his mother in taking on the "heavy responsibilities of sovereignty".

It is the first time the historic ceremony, which dates back centuries, has been televised.

The King himself was not present for the first part of the meeting when he was proclaimed monarch by the Accession Council, made up of senior politicians, judges, and officials.

Clerk of the Privy Council Richard Tilbrook proclaimed Charles "King, head of the Commonwealth, defender of the faith", before declaring "God Save the King".

The packed room, including all of the six living former British prime ministers, repeated the phrase. The proclamation was then read out on a balcony above Friary Court in St James's Palace.