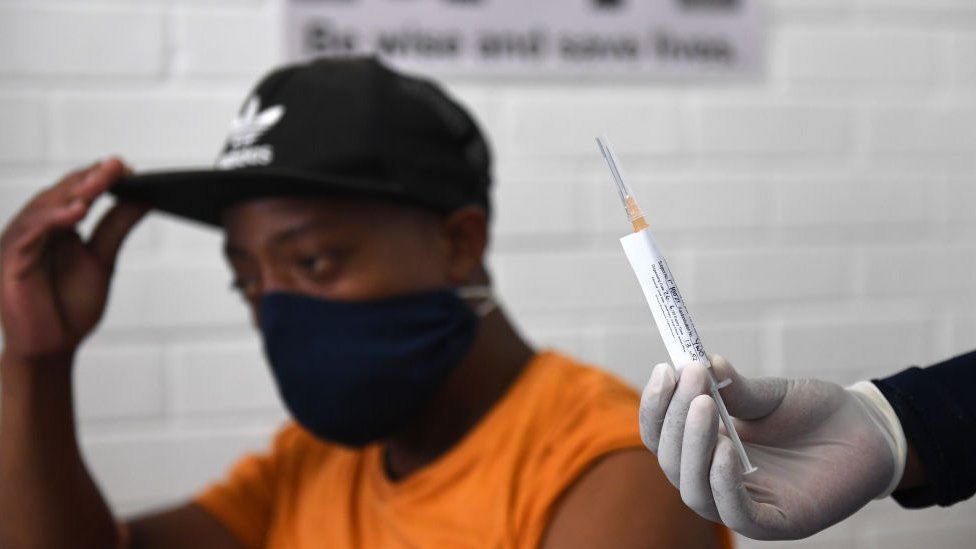 South Africa's decision to halt its rollout of the Oxford-AstraZeneca vaccine after a study showed "disappointing" results against its new Covid-19 variant may have left the nation in shock, but it also shows how scientists are at the forefront of the battle against coronavirus.

How do frontline workers feel?
There is no denying that they feel anxious.

Siviwe Gwarube, head of health for the main opposition Democratic Alliance, said the setback left them vulnerable to a third wave.

South Africa has recorded almost 1.5 million coronavirus cases and more than 46,000 deaths since the pandemic began - a higher toll than any other country on the continent.

"I had a lot of hope that the vaccine would change the situation we're in as a country. A lot of people are losing jobs. I'm a medical student and we are really exposed to Covid-19. It was a blow for me when I heard that the efficacy of the vaccine was lower," a young male medic, who asked to remain anonymous, told the BBC.

But health experts say while the new variant has affected South Africa's initial vaccine plan, all is not lost - and 100,000 older nurses and other health workers will still be given the Oxford-AstraZeneca vaccine as part of a new trial.

This is because they believe that the vaccine may still be effective in preventing severe illness and go some way to reducing the number of people who need to be admitted to hospital for treatment.

This is important in a country where some 80% of the population cannot afford private health care and rely on state hospitals, which are currently overstretched.

Was the AstraZeneca trial a waste of time?
No, say South African experts.

"We are experiencing science in real time," says Dr Kerrin Begg, a public medicine specialist at the University of Cape Town.

And South Africa's health officials have been commended for following the advice of scientists in their handling of the coronavirus outbreak. Many of their, at times, controversial decisions have been driven by erring on the side of caution.

In this case, the most recent phase of the study on the AstraZeneca vaccine was carried out on 2,000 people whose average age was 31.

Recent data from the trial shows it was not effective against mild and moderate symptoms of the more contagious South African variant, also known as 501.V2 or B.1.351.

This is a stumbling block as 90% of new infections in South Africa are of the new variant.

The scientists now want to see if the study on the group of 100,000 nurses and other healthcare workers will show if the vaccine is effective against the new variant and in preventing severe illness in an older age group

And Dr Begg says the public should not lose sight of how much has been achieved by scientists not just in South Africa but globally since the virus's outbreak last year.

"Vaccines usually take years to develop because they are amongst the most regulated substances on Earth. But we're in a position now where many have been passed for safety and are becoming available to the public, that is an incredible achievement."

Are anti-vax sentiments a factor?
South Africans generally do not have a problem with vaccinations - from birth, children are immunised for various diseases including polio, measles and chicken pox and hepatitis B up until they begin school.

These programmes are done through both private and state hospitals.

However, in the case of coronavirus, there have been some who have voiced concerns about the speed at which the vaccines have been made available, partly down to fake news peddled on social media and conspiracy theories accusing pharmaceuticals of trying to "poison" people through the vaccines.

Even some of those working on the frontline have doubts, including this male health worker in Johannesburg, who asked not to be named: "I am worried that they want to test these vaccines on us healthcare workers.

"We work in medicine, it's a concern to me that we don't know all the side-effects of these vaccines and their contra-indications but we're expected to just take them and don't have a say."

Yet most are confident in the science as expressed by a medic working on paediatric wards in a Johannesburg hospital: "If there was a vaccine we could use I would feel more protected, less anxious, feel that there's hope.

"Vaccines have been helping us for ages in South Africa, I would take any vaccine that's proven to be safe and effective."

Another Johannesburg resident agreed: "We lost family members because of Covid.

"We need to get vaccines that work so we can get on with our lives," she said.

So what happens next?
There are suggestions that if this nurses' trial goes well, AstraZeneca will still be administered to all health workers and to be followed with a "booster" once it becomes available.

The country's new plan, according to Health Minister Zweli Mkhize, includes the new Johnson & Johnson single-dose vaccine - of which it has ordered nine million doses

Trials of that vaccine have shown a high degree of efficacy against Covid-19, including the new variant discovered in South Africa in November and since confirmed in at least 30 other countries worldwide.

The government has also secured 20 million doses of the Pfizer/BioNTech vaccine. Both expected to arrive in the next few months.

Officials say they are now working on accelerating their delivery.

How bad is the situation in South Africa?
South Africa has recently passed the peak of a second wave of infections.

But scientists warn of another surge in the winter months, around June, so officials are imploring citizens not to drop their guard.

"Vaccines are not going to stop Covid. Human behaviour is still one of the most important tools," says Dr Begg.

"People need to understand that the first defence is washing hands, keep wearing masks, practice social distance and limiting being in large crowds."

And as Prof Shabir Madhi, who led the Oxford-AstraZeneca vaccine trial in South Africa, has warned - mutations are always going to be a problem.

The message is "it is not too late" to change your behaviour to beat the virus.