The real reason humans are the dominant species 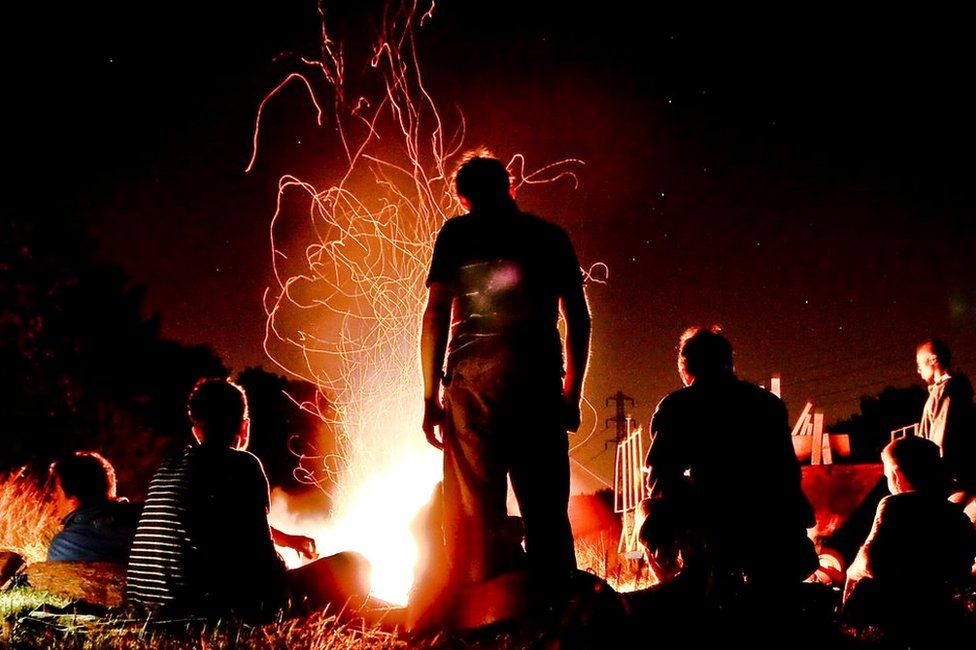 From early humans rubbing sticks together to make fire, to the fossil fuels that drove the industrial revolution, energy has played a central role in our development as a species.

But the way we power our societies has also created humanity's biggest challenge. It's one that will take all our ingenuity to solve.

Energy is the key to humanity's world domination.

Not just the jet fuel that allows us to traverse entire continents in a few hours, or the bombs we build that can blow up entire cities, but the vast amounts of energy we all use every day.

Consider this: a resting human being requires about the same amount of energy as an old-fashioned incandescent light bulb to sustain their metabolism - about 90 watts (joules per second).

But the average human being in a developed country uses more like 100 times that amount, if you add in the energy needed to get around, build and heat our homes, grow our food and all the other things our species gets up to.

The average American, for example, consumes about 10,000 watts.

That difference explains a lot about us - our biology, our civilisation and the unbelievably affluent lifestyles we all lead - compared, that is, with other animals.

Because unlike virtually every other creature on Earth, we human beings do much more with energy than just power our own metabolism.

We are a creature of fire.

Humanity's exceptional relationship with energy began hundreds of thousands of years ago, with our discovery of fire.

Fire did much more than just keep us warm, protect us from predators and give us a new tool for hunting.

A number of anthropologists believe fire actually refashioned our biology.

"Anything that allows an organism to get energy more efficiently is going to have huge effects on the evolutionary trajectory of that organism," explains Prof Rachel Carmody of Harvard University in Cambridge, Massachusetts.

She believes the decisive development was cooking. Cooking transforms the energy available from food, she argues.

The carbohydrates, proteins and lipids that provide our bodies with nutrition are unravelled and exposed when they are heated.

That makes it is easier for our digestive enzymes to do their work effectively, extracting more calories more quickly than if we ate our food raw.

Think of it as a way of "pre-digesting" food.

Prof Carmody and her colleagues believe the extra energy it reliably gave us allowed us to evolve the small colons and relatively large energy-hungry brains that distinguish us from our primate cousins.

And, as our brains began to grow, it created a positive feedback loop.

As neurons are added to the mammalian brain, intelligence increases exponentially, says Suzana Herculano-Houzel, a neuroscientist based at Vanderbilt University in Nashville, Tennessee.

With smarter brains, we got better at hunting and foraging.

And we figured out more ways to access the calories in our food - by pounding it with a rock, by grinding into a powder, or even just letting it rot - or of course by roasting it over a fire.

In doing so, we further increased the supply of energy to our bodies.

This allowed us to evolve even smarter brains, and the ensuing virtuous circle propelled our brains to the top of the class.

Over hundreds of thousands of years, the climate constantly changed, with ice sheets advancing and then retreating across the northern hemisphere.

The last Ice Age ended around 12,000 years ago. Global temperatures rose rapidly and then stabilised, and humanity embarked on its next energy transformation.

It was a revolution that would see the world reach unprecedented levels of technological change.

"Within 2,000 years, all over the world, in China, in the Near East, in South America, in Mesoamerica, you're getting people domesticating crops," says Dr Robert Bettinger of the University of California Davis.

Cultivating crops had been pretty much impossible during the Ice Age, he believes, but the new warmer climate, coupled with a big rise in carbon dioxide (CO2) levels, was very hospitable to plant life.

The cooking ape became a farming ape too.

It took huge investments of human energy in the form of hard, arduous labour. But in return, our ancestors reaped a far more abundant and reliable food supply.

Think for a moment about what you are doing when you raise crops.

Fields act like a kind of solar panel, but instead of making electricity, they turn the Sun's rays into packages of digestible chemical energy.

Above all were cereal crops - domesticated grains like wheat, maize and rice acted like a kind of storable energy currency.

You can bank it away in a silo to consume at your leisure during the winter months. Or you can cart it off to market to trade with others. Or invest it in planting the next harvest.

Or in fattening up animals, which could convert that energy into meat, dairy or draught power.

As the centuries passed, animals and plants domesticated in different locations would coalesce into a kind of agricultural package, says Melinda Zeder, an archaeologist who studies the development of pastoral farming at the Smithsonian Institution.

The crops fed animals. The animals worked the land. Their manure fed the crops. And, says Dr Zeder, as a package, they provided a much more reliable and abundant food source.

More food meant more people - who could then expand into new territory, and develop new technologies that produced even more food.

It was another virtuous circle, but this time powered by the solar energy captured through agriculture.

The surplus energy it created meant we could sustain much larger populations, and what's more, not everyone needed to farm.

People could specialise in making tools, building houses, smelting metals or, for that matter, telling other people what to do.

Civilisation was developing and with it some fundamental changes in the relationships between people.

Those who worked long hours in the fields would naturally want to hoard their grain. And then there were those with metal weapons who took a cut from those granaries in the form of taxation.

In fact, for thousands of years, the standard of living for the vast majority people on Earth did not improve significantly, despite the bounty of agriculture.

"Hunter gatherer societies were the original affluent society," says Claire Walton, the resident archaeologist at Butser Ancient Farm in Hampshire. "They spent something like 20 hours a week in what you would call proper labour."

By comparison, a Neolithic, Iron Age, Roman or Saxon farmer would be doing at least double that, she believes.

Only kings and nobles lived the kind of affluent, leisurely lifestyles that more and more of us enjoy today.

It would take an explosive shift in energy use to achieve that, a shift powered by fossil fuels.

By the 18th Century, our increasingly populous societies were beginning to run up against the limits of what the energy provided by the daily influx of the Sun's rays could do.

A Malthusian reckoning loomed. How could we grow food fast enough to feed all those mouths? Or indeed wood to build all our houses and ships, and to make the charcoal to smelt all our metal tools?

So we began to turn instead to a black rock that we could dig up and burn in almost unlimited quantities.

Coal contains the solar energy captured over millions of years by fossilised forests.

In the 20th Century, the black stuff would be succeeded by those even richer geological stores of photosynthetic energy - oil and natural gas.

And with them, all sorts of new activities became possible.

Not only were fossil fuels abundant. They also provided ever greater sources of power, liberating us from our dependence on animals.

First came steam engines to turn the heat from coal into motion. Then the internal combustion engine. Then the jet engine.

"A horse can only give you one horsepower," explains Paul Warde, an environmental historian at Cambridge University.

"We now have industrial machines that can give you tens of thousands of horsepower, and at its limits a Saturn V rocket: 160 million horsepower to deliver you off the surface of the Earth."

Fossil fuels power much more than just our vehicles.

Some 5% of the world's natural gas supply is used to create ammonia-based fertilisers, for example, without which half the world's population would starve.

An estimated 8% of the world's CO2 emissions are from concrete.

But burning fossil fuels has had an incredible effect on our standard of living.

Since the Industrial Revolution we have grown taller and healthier, our life expectancy has increased vastly, and in the developed world we are on average 30 to 40 times better off.

And it's all thanks to the energy revolution driven by fossil fuels, argues Vaclav Smil of Manitoba University in Canada, a hugely respected expert on the role of energy in our societies.

"Without fossil fuels, no rapid mass transportation, no flying, no surplus consumer food production, no cell phone made in China, brought to Southampton by a giant container ship with 20,000 containers. All of that is fossil fuels," he says.

We live in a fossil fuel society, believes Smil.

But while they have lifted ever more of us out of agrarian hardship, and created our global economy and high living standards, the catastrophic climate change they are creating now threatens to derail that society.

Just as two centuries ago we reached the limits of what agriculture could do, now global warming is imposing a limit on what coal, oil and gas can safely do.

It has created the greatest challenge human society has ever faced - moving back to relying on the daily influx of energy from the Sun to meet the huge energy needs of eight billion people and counting.

I believe that is possible. But you'll have to listen to my new radio series to find out how.