TikTok to launch legal action against Trump over ban 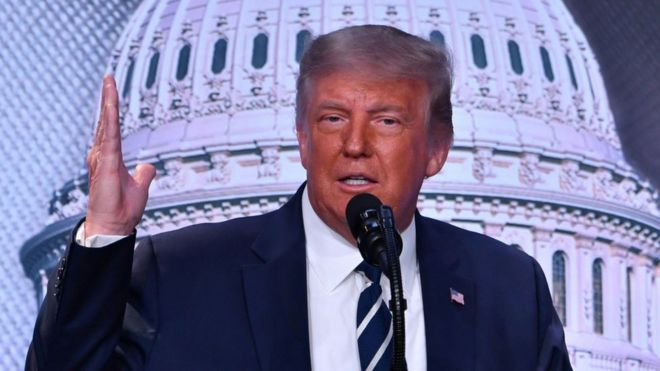 Chinese video app TikTok is set to launch legal action to challenge a ban imposed by US President Donald Trump.

Officials in Washington are concerned that the company could pass data on American users to the Chinese government, something ByteDance has denied doing.

The short video-sharing app has 80 million active US users.

READ ALSO: Coronavirus pandemic could be over within two years - WHO head

TikTok says it has tried to engage with the Mr Trump's administration for nearly a year but has encountered a lack of due process and an administration that pays "no attention to facts".

"To ensure that the rule of law is not discarded and that our company and users are treated fairly, we have no choice but to challenge the executive order through the judicial system," a company spokesperson said.

On Friday a group of Chinese-Americans filed a separate lawsuit against the president's similar ban on the social media app WeChat, which is owned by the Chinese firm, Tencent.

TikTok's users post short video clips on the platform on topics ranging from dance routines to international politics. Its popularity exploded in recent months particularly with teenagers and it has been downloaded more than a billion times around the world.

But Mr Trump claims China is able to use the app to track the locations of federal employees, collect information for use in blackmail, or spy on companies.

The growth of mobile apps developed and owned by Chinese firms "threatens the national security, foreign policy, and economy of the United States", Mr Trump says.

"This data collection threatens to allow the Chinese Communist Party access to Americans' personal and proprietary information," he claims in his executive order.

TikTok says it has never handed over any US data user to Chinese authorities.

Mr Trump's actions against TikTok and WeChat are the latest in a growing campaign against China ahead of the US presidential election in November.

Since taking office he has been waging a trade war against China.

The US is not the only country to introduce blocks on TikTok. India has banned use of the app, and Australia is also considering taking action.

The app is viewed by some as being a key instrument in China's internal surveillance apparatus - requiring local users who have been accused of spreading malicious rumours to register a facial scan and voice print.

WeChat is very popular with users who have connections to China, where major social networking platforms - such as WhatsApp and Facebook - are blocked.

"Having it suddenly cut off would be disastrous and frightening for people, especially in the pandemic," said lawyer Michael Bien, who's representing those challenging President Trump's ban.

He said the executive order is unconstitutional, because it violates users' rights to free speech.