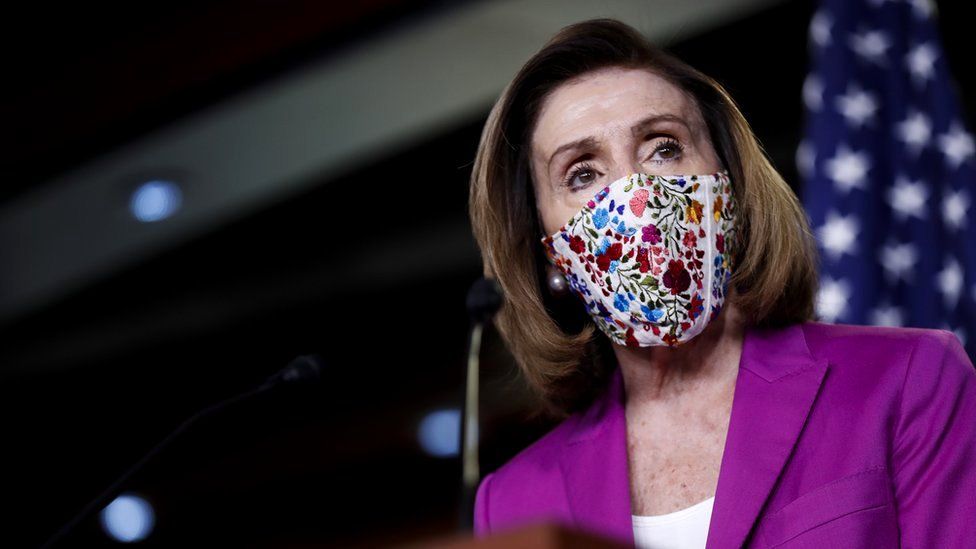 US House Speaker Nancy Pelosi has shared with lawmakers plans to remove President Donald Trump from office before starting an impeachment process.

The House of Representatives would vote on a resolution calling on Vice-President Mike Pence to remove Mr Trump's presidential powers.

If this move fails, Democrats will introduce a charge of "incitement of insurrection" against Mr Trump over his role in the storming of the Capitol.

The first vote could happen on Monday.

On Sunday, Ms Pelosi wrote to lawmakers outlining plans for a resolution to formally request that Vice-President Pence invoke the 25th Amendment.

The move would allow Mr Pence to become acting president and remove Mr Trump from the White House.

Her letter said that this would be the first step, and that House Democrats would then "proceed with bringing impeachment legislation to the floor".

"In protecting our constitution and our democracy, we will act with urgency, because this president represents an imminent threat to both," Ms Pelosi said.

House whip James Clyburn, another senior Democrat, earlier told CNN that while a vote on an article of impeachment against Mr Trump was likely to take place this week, the party may not send any articles to the Senate for trial until after President-elect Joe Biden's first 100 days in office.

"Let's give President-elect Biden the 100 days he needs to get his agenda off and running," Mr Clyburn said.

That would allow Mr Biden to confirm his new cabinet and kick-start key policies including tackling coronavirus - something that would have to wait if the Senate had already received the impeachment articles.

Mr Trump has made no public statements since he was banned from several social media platforms - including Twitter - on Friday.

On Sunday, however, the White House announced that the president would travel to Texas on Tuesday to visit a stretch of the border wall with Mexico to highlight his administration's work there.

Mr Trump has been accused by Democrats and an increasing number of Republicans of encouraging last Wednesday's riot in Congress in which five people died.

But no Republican senators have said they will vote to convict him of wrongdoing in the Senate.

"I think the best way for our country.... is for the president to resign and go away as soon as possible," Sen Toomey told NBC's Meet the Press.

"I acknowledge that may not be likely, but I think that would be best."

The actor likened Wednesday's violence to that of the Kristallnacht, or the Night of Broken Glass, during which Jewish property was destroyed in Nazi Germany in 1938.

As investigators try to prosecute rioters who stormed the Capitol, police departments in Virginia and Washington state have placed officers on administrative leave for allegedly attending the events while off-duty.

Fire departments in Florida and New York City have also said some of their members may have been present when the mob broke into the Capitol, according to Reuters news agency.

The White House has dismissed the impeachment as a "politically motivated" move that would "only serve to further divide our great country".

If the process does go ahead, Mr Trump could become the only president in US history to have been impeached twice.

For that to happen, impeachment charges must be brought to the House and passed in a vote.

Proceedings would then move to the Senate, where a two-thirds vote is necessary for a president's removal. If he is convicted, the Senate could also hold a vote to bar Mr Trump from holding public office again.

However, Mr Clyburn, a congressman from South Carolina, said he did not think it would be possible to impeach and hold a trial before Mr Trump leaves office in 10 days' time.

Instead, Democrats are considering delaying sending impeachment articles to the Senate.

They have already informally urged Mr Pence to invoke the 25th Amendment.

However, although Mr Pence has appeared to distance himself from the president by saying on Sunday he planned to attend Mr Biden's inauguration on 20 January, there is no sign that the vice-president is prepared to use the amendment.

Mr Trump has said he will not attend Mr Biden's swearing-in ceremony. He has now admitted defeat in the 3 November election and has promised a peaceful transfer of power, but has continued to peddle baseless claims of widespread voter fraud.

Mr Biden said impeachment was for Congress to decide, but that he had thought "for a long time President Trump was not fit to hold the job".