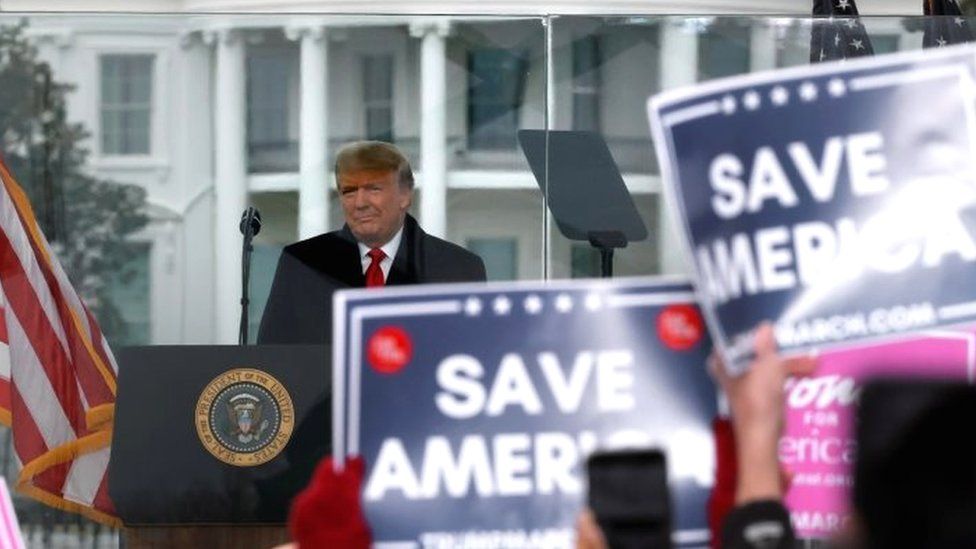 Donald Trump's insurrection incitement charge is a "monstrous lie", defence lawyers said as they presented evidence in the US Senate.

Mr Trump is accused of causing riots in the Capitol on 6 January which left five people dead. He denies the charge.

Most Republicans have indicated they will not vote to convict Mr Trump.

The defence team took less than four of its 16 hours, trying to move the impeachment trial to a speedy end.

After this, senators were given four hours to ask questions of the two sides.

Earlier, they sat through two days of minute-by-minute accounts featuring video and audio footage, as Democratic prosecutors sought to show that Donald Trump had a pattern of condoning violence, had done nothing on the day to prevent the riot, and had expressed no remorse.

They argued that an acquittal could see a repeat attack on Congress.

What is Trump's defence?
On Friday, Mr van der Veen used his opening remarks to dispute the Democrats' case that Mr Trump had incited violence during his speech to supporters on 6 January in Washington DC to try to stop Joe Biden's election victory being certified.

Mr Trump had made allegations of voter fraud and urged his supporters to converge at the Capitol building a short while before the riot broke out.

However, the fact there was evidence among some groups that violence had been pre-planned demonstrated "the ludicrousness of the incitement allegations against the [former] president", Mr van der Veen said, adding: "You can't incite what was already going to happen."

"To claim that the president in any way wished, desired or encouraged lawless or violent behaviour is a preposterous and monstrous lie. In fact, the first two messages the president sent via Twitter once the incursion at the Capitol began were 'Stay Peaceful' and "No violence because we are the party of law and order,'" the lawyer said.

Make no mistake, he told the senators, "this is an effort to smear, censor and cancel not just President Trump, but the 75 million Americans who voted for him".

The lawyer also argued that Mr Trump had a legal right to challenge the election result.

"In the past, numerous other candidates for president have used many of the same processes to pursue their own election challenges," Mr van der Veen said, before showing a montage of clips from 2017 when Democrats objected to the election results that gave Mr Trump his victory.

Less could be more for Trump's defence
Analysis box by Anthony Zurcher, North America reporter
On day four of Donald Trump's impeachment trial it was the turn of the defence to make its case.

Earlier this week, Mr Trump's legal team asserted that the entire impeachment trial was unconstitutional and a violation of the former president's due process rights.

They lost that argument, so now they had to set about defending the former president on the merits of the case.

All in all, it took Trump's lawyers just over three hours to present their arguments - a far cry from the 13 hours the impeachment managers took to lay out their prosecution.

For the defence, less could be more, as it already seems clear that enough Republicans will stick by the former president to assure a not guilty verdict.

What has been the Democrats' case?
The Democrats had presented new video footage of the riots on both Wednesday and Thursday, taking senators step by step through the events of the day of the riot.

The impeachment managers hoped the graphic shots of violent rioters, fleeing lawmakers and crushed police would bolster their case that Mr Trump had incited the riot.

House prosecutor Joe Neguse made the case that Mr Trump was "not just some guy" making a controversial speech - he was a president addressing supporters who were "poised for violence [and] he struck a match".

Representative Jamie Raskin said: "My dear colleagues, is there any political leader in this room who believes that if he's ever allowed by the Senate to get back into the Oval Office, Donald Trump would stop inciting violence to get his way?"

Congressman Ted Lieu said: "Impeachment, conviction and disqualification [from office] is not just about the past. It's about the future. It's making sure that no future official, no future president does the same exact thing."

What happens next?
A vote is expected over whether to allow witnesses if either side wants them. If they do not, or if the vote fails, both sides will make brief closing arguments followed by the final vote on Mr Trump's fate.

This could wrap up as early as Saturday night or by Monday at the latest - less than a week from start to finish.

Senators on both sides have indicated this is likely.

A two-thirds majority is required to convict Donald Trump in the 100-seat Senate, which is split 50-50 between Republicans and Democrats.

At least 17 members of Mr Trump's party would need to vote against him and although six have shown some movement that way, none of the others have, with many staunchly rejecting the accusation.

Several Republicans have said they do not believe an ex-president should be impeached, although ahead of the trial a Senate vote rejected that position.

If Mr Trump were convicted, the Senate could then vote to bar him from holding elected office again.