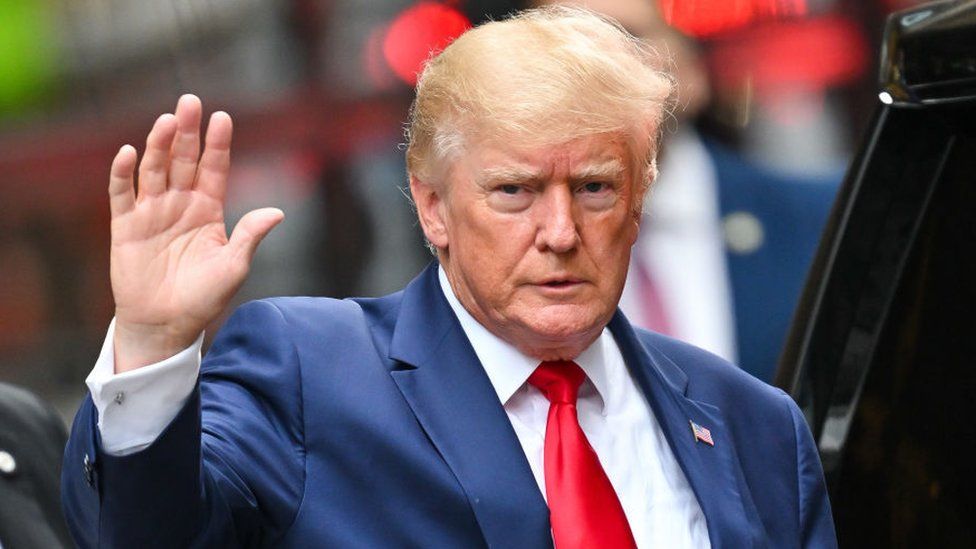 The FBI seized top secret files in a search of former US President Donald Trump's estate in Florida this week, according to a search warrant.

Agents removed 11 sets of documents, including some marked "TS/SCI", a designation for material that could cause "exceptionally grave" damage to US national security.

Mr Trump denied any wrongdoing and said the items were declassified.

It was the first time an ex-president's home was searched in a criminal probe.

The list of items was made public on Friday afternoon after a judge unsealed a seven-page document that included the warrant authorising the search of Mr Trump's Palm Beach residence, Mar-a-Lago.

It said more than 20 boxes of items were taken on Monday, including a binder of photos, a handwritten note, unspecified information about the "President of France" and a clemency letter written on behalf of long-time Trump ally Roger Stone.

The warrant indicates that FBI agents were looking into potential violations of the Espionage Act, which makes it illegal to keep or transmit potentially dangerous national security information.

The removal of classified documents or materials is prohibited by law. Mr Trump increased the penalties for the crime while in office and it is now punishable by up to five years in prison.

The warrant notes that the locations searched at Mar-a-Lago include an area called the "45 office" and storage rooms, but not private guest suites being used by Mr Trump and his staff.

The justice department had asked a court to make it public on Thursday, a move considered rare amid an ongoing investigation.

It was approved by a judge on 5 August, three days before it was carried out on Monday, 8 August.

On Friday night, Mr Trump's office issued a statement maintaining that he had used his authority while president to declassify the documents.

"He had a standing order that documents removed from the Oval Office and taken into the residence were deemed to be declassified," the statement said.

"The power to classify and declassify documents rests solely with the President of the United States.

"The idea that some paper-pushing bureaucrat, with classification authority delegated by the president, needs to approve of declassification is absurd."

Legal experts have told US media it is unclear whether this argument would hold up in court. "Presidents can declassify information but they have to follow a procedure," Tom Dupree, a lawyer who previously worked in the justice department, told the BBC.

"They have to fill out forms. They have to give certain authorisations. They can't simply say these documents are declassified. They have to follow a process [and it is] not clear that was followed here."

A spokesman for Mr Trump, Taylor Budowich, said the administration of President Joe Biden "is in obvious damage control after their botched raid".

Mr Budowich accused the administration of "leaking lies and innuendos to try to explain away the weaponisation of government against their dominant political opponent".

Mr Trump's conservative allies have also condemned the raid as a political hit job as he considers another run for the presidency in 2024.

Law enforcement agencies around the country are reportedly monitoring online threats against government officials that have emerged in the wake of the FBI search.

"I will not stand by silently when their integrity is unfairly attacked," he told reporters.