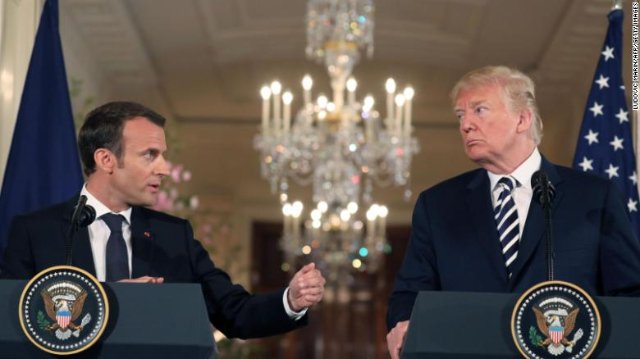 US President Donald Trump has accused French President Emmanuel Macron of "foolishness" over a digital services tax, and hinted that he would tax French wine in retaliation.

Mr Trump voiced his anger in a Tweet on Friday, in response to French plans to tax multinational firms like Google.

French authorities argue that the firms pay little or no corporate tax in countries where they are not based.

The Trump administration has said the tax unfairly targets US tech giants.

"France just put a digital tax on our great American technology companies. If anybody taxes them, it should be their home Country, the US," Mr Trump wrote on Twitter.

Asked about the issue in the Oval Office later, Mr Trump, who is teetotal, said: "I've always liked American wines better than French wines. Even though I don't drink wine. I just like the way they look."

The US is the world's largest consumer of wine and the largest import market, with France consistently among the top origin countries for imported wine.

French Finance Minister Bruno Le Maire responded on Friday by saying that France would stick to its digital tax plans. "Universal taxation of digital operations is a challenge that affects us all," he said.

The French government argues that multinational firms such as Apple, which are headquartered outside the country, pay little or no tax on their sales in France. The digital sales tax was approved by the French senate on Thursday, a week after it was passed by the lower house, the National Assembly.

Any digital company with revenue of more than €750m ($850m; £670m) - of which at least €25m is generated in France - will now be subject to the tax, which will be retroactively applied from early 2019 and is expected to raise about €400m in revenue this year.

Earlier on Friday, President Trump warned US tech giant Apple that it would not be given any tariff relief on parts made in China. "Make them in the USA, no Tariffs!" he wrote.

Why target tech giants?
At present, they are able to pay little or no corporate tax in countries where they do not have a large physical presence. They declare most of their profits where they are headquartered.

The European Commission estimates that on average traditional businesses face a 23% tax rate on their profits within the EU, while internet companies typically pay 8% or 9%.

France has long argued that taxes should be based on digital, not just physical presence. It announced its own tax on big technology firms last year after EU-wide efforts stalled.

An EU levy would require consensus among members, but Ireland, the Czech Republic, Sweden and Finland raised objections. France's new 3% tax will be based on sales made in the country, rather than on profits.
French Finance Minister Bruno Le Maire criticised US threats of retaliation

Defending the new tax on Thursday, Mr Le Maire had said France was "sovereign and decided its own tax rules".

"I want to tell our American friends that this should be an incentive for them to accelerate even more our work to find an agreement on the international taxation of digital services," he said.

About 30 companies will pay it - mostly US groups such as Alphabet, Apple, Facebook, Amazon and Microsoft. Chinese, German, Spanish and British firms are also affected, as well as the French online advertising firm Criteo.

The French government says the tax will end if a similar measure is agreed internationally. The big tech companies have argued they are complying with national and international tax laws.

Prior to Mr Trump's tweet on Friday, US Trade Representative Robert Lighthizer had announced an investigation into the French tax, arguing that France was "unfairly targeting the tax at certain US-based technology companies".