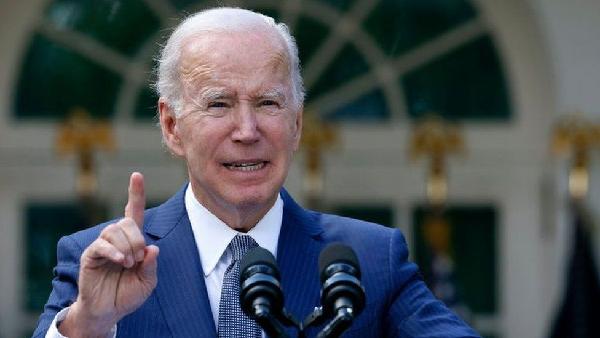 President Joe Biden has warned Russia that the United States will not be intimidated by reckless threats after Vladimir Putin annexed four occupied regions of Ukraine.

Mr Putin appeared to make a veiled threat to use nuclear weapons to defend the new annexed territories.

He declared that the regions would "forever" be part of Russia.

Nato Secretary-General Jens Stoltenberg called the annexation "the most serious escalation since the start of the war".

In a speech, the Russian leader claimed citizens in Kherson, Zaporizhzhia, Luhansk and Donetsk had voted to be "with their people, their motherland".

He was referring to so-called referendums held in the regions in recent days, but Ukraine and Western governments have condemned the votes as a sham.

But much of Mr Putin's speech was used to rail at the West.

He said the US had created a "precedent" by using nuclear weapons against Japan at the end of World War Two, in an apparent threat.

Mr Putin last week said his country had "various weapons of destruction" and would "use all the means available to us", adding: "I'm not bluffing."

The Kremlin has made clear that any attack on the newly annexed regions would be seen as an attack on Russian soil, signalling an escalation in the war.

President Biden called out his Russian counterpart's "reckless words and threats", but added that Mr Putin was "not going to scare us".

"America and its allies are not going to be intimidated," President Biden said at the White House.

He then addressed the Russian president directly, pointing his finger into the camera.

"America's fully prepared, with our Nato allies, to defend every single inch of Nato territory," he said, in reference to the Western security bloc.

Shortly after, Mr Biden's top national security official said while there was a chance of Moscow resorting to nuclear weapons, there did not appear to be an imminent threat.

Mr Stoltenberg of Nato was reluctant to be drawn on the bid, saying the decision rested with the bloc's 30 members.

The alliance's members "do not and will not" recognise any of the annexed territory as part of Russia, Mr Stoltenberg told reporters, accusing Mr Putin of "irresponsible nuclear sabre-rattling".

He called the annexation a "pivotal moment" in the war.

"All territories illegally occupied by Russian invaders are Ukrainian land and will always be part of this sovereign nation."

South Korea said it did not recognise the annexations, adding that Ukraine's sovereignty, territorial security and independence must be protected.

As Mr Putin spoke in Moscow, 750km (466 miles) to the south, his forces were being surrounded by Ukrainian troops in Lyman, a strategically important town in the eastern province of Donetsk - one of four regions annexed by Russia.

Ukraine's military has been keen to conceal the pace of its troops' advance in the area, but one video on social media appeared to show Kyiv's forces in the centre of Yampil, just 16km (9 miles) south-east of Lyman.

And late on Friday night, Kyiv's defence ministry said it had taken the village of Drobysheve, 8km (4 miles) north-west of Lyman.

Elsewhere, in Zaporizhzhia some 30 Ukrainians were killed in a Russian rocket strike on a civilian convoy.

At the same time, Russia vetoed a UN Security Council resolution which would have condemned its annexation of the four occupied regions. Moscow's ambassador, Vasily Nebenzia, complained that it was unprecedented to seek the condemnation of a permanent member of the body.

While the Kremlin's blocking of the motion was anticipated, both India and China abstained.