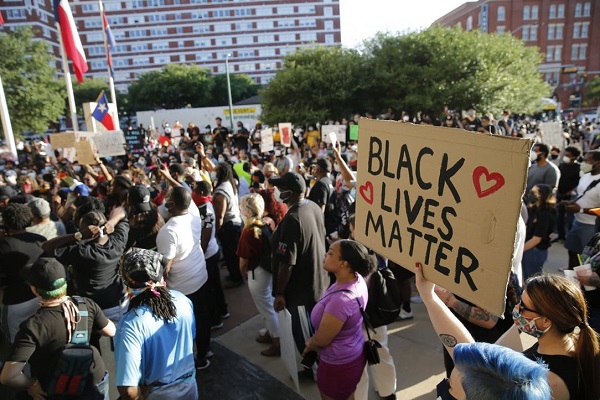 Violent protests over the death of an unarmed African-American man at the hands of police officers in Minnesota "are no longer in any way" about his killing, the state's governor has said.

Tim Walz spoke after a night of unrest in several US cities over the death of George Floyd in Minneapolis.

He said that as a result, he was taking the unprecedented step of mobilising the state's entire National Guard.

There are also reports that military police units could deploy.

An ex-Minneapolis policeman has been charged with murder over the death of Mr Floyd, 46, in police custody on Monday.

Derek Chauvin, who is white, was shown in footage kneeling on Mr Floyd's neck for several minutes, even after he said he couldn't breathe. He and three other officers have since been sacked.

The video went viral online, reigniting US anger over police killings of black Americans, and reopening deep wounds over racial inequality across the nation.

On Friday night protesters clashed with police in cities including New York, Atlanta and Portland. In Washington DC, the White House was briefly locked down.

In Minnesota, "our great cities of Minneapolis and St. Paul are under assault," Mr Walz said. "The situation in Minneapolis is now about attacking civil society, instilling fear and disrupting our great city."

He said violence on Friday night had made "a mockery of pretending this is about George Floyd's death, or inequities or historical traumas to our communities of colour".

Mr Chauvin, 44, is due to appear in court in Minneapolis for the first time on Monday.

President Donald Trump has described the incident as "a terrible, terrible thing" and said he had spoken with Mr Floyd's family, who he described as "terrific people".

On Saturday, Mr Trump praised the US Secret Service for securing the White House and blamed the violence on "organised groups".

What's the latest on the protests?
Minnesota remains the most volatile region, with curfews ordered for the Twin Cities of Minneapolis-Saint Paul from 20:00 to 06:00 on Friday and Saturday evening.

Protesters defied the curfew on Friday. Fires, many from burning cars, were visible in a number of areas with fire officials unable to reach some sites.

Television pictures also showed looting in Minneapolis, with police officers thin on the ground. Eventually about 500 National Guard troops moved in but Mr Walz said he was activating 1,000 more for Saturday night because of the "chaotic, dangerous and unprecedented" situation.

In Atlanta, Georgia, a state of emergency was declared for some areas to protect people and property. Buildings were vandalised and a police vehicle was set alight as protesters gathered near the offices of news broadcaster CNN.

Rapper and activist Killer Mike also called for calm in Atlanta, despite saying he was also "mad as hell". "It is your duty not to burn your own house down for anger with an enemy," he said in an emotional speech.

In New York's Brooklyn district, protesters clashed with police, throwing projectiles, starting fires and destroying police vehicles. A number of officers were injured and many arrests made.

Mayor Bill de Blasio tweeted: "We don't ever want to see another night like this."

The mayor of Portland, Oregon, has declared a state of emergency amid looting, fires and an attack on a police precinct. An immediate curfew until 06:00 local time (13:00 GMT) was imposed and it will restart at 20:00.

What are the legal moves so far?
Mr Chauvin has been charged with third-degree murder and second-degree manslaughter over his role in Mr Floyd's death.

Mr Floyd's family and their lawyer, Benjamin Crump, said that this was "welcome but overdue".

The family said they wanted a more serious, first-degree murder charge as well as the arrest of the three other officers involved.

Hennepin County Prosecutor Mike Freeman said he "anticipates charges" for the other officers but would not offer more details.

According to the criminal complaint, Mr Chauvin acted with "a depraved mind, without regard for human life".

How did George Floyd die?
The full report by the county medical examiner has not been released, but the complaint states that the post-mortem examination did not find evidence of "traumatic asphyxia or strangulation".

The report says Mr Chauvin had his knee on Mr Floyd's neck for eight minutes and 46 seconds - almost three minutes of which was after Mr Floyd became non-responsive.

Nearly two minutes before he removed his knee the other officers checked Mr Floyd's right wrist for a pulse and were unable to find one. He was taken to the Hennepin County Medical Center in an ambulance and pronounced dead around an hour later.

The Minnesota police handbook states that officers trained on how to compress a detainee's neck without applying direct pressure to the airway can use a knee under its use-of-force policy. This is regarded as a non-deadly-force option.

What happened in the arrest?
Officers suspected Mr Floyd had used a counterfeit $20 note and were attempting to put him in a police vehicle when he dropped to the ground, telling them he was claustrophobic.

According to police, he physically resisted officers and was handcuffed.

Video of the incident does not show how the confrontation started, but a white officer can be seen with his knee on Mr Floyd's neck, pinning him down.

Mr Floyd can be heard saying "please, I can't breathe" and "don't kill me".

A former local nightclub owner has said Mr Chauvin and Mr Floyd both worked as bouncers at her venue in south Minneapolis up until last year, though it is unclear if they knew one another.