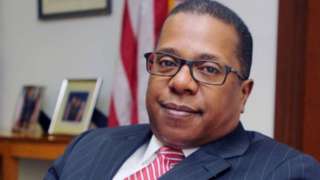 The US government has summoned Zimbabwe's ambassador to explain comments made about its envoy by the country's ruling party.

A spokesperson of Zimbabwe's ruling party, Zanu-PF, had on Monday accused the US of sponsoring anti-government protests in the country and called the US ambassador Brian Nichols a "thug".

The Assistant Secretary for the State Department’s Bureau of African Affairs Tibor Nagy termed the comments as "deeply offensive", adding that the Zimbabwe envoy had been summoned to explain.

The chairman of US Senate Foreign Relations Committee Jim Risch tweeted that Zimbabwe was using "name calling, deflection and misinformation to justify their current economic and political crisis".

Ambassador Nichols has had several run-ins with the Zimbabwean government.

Zimbabwe's foreign affairs minister in November 2019 threatened to expel the ambassador accusing him of "behaving and conducting himself like an opposition member".

The country has been protesting against US sanctions and the embassy has been on the receiving end.