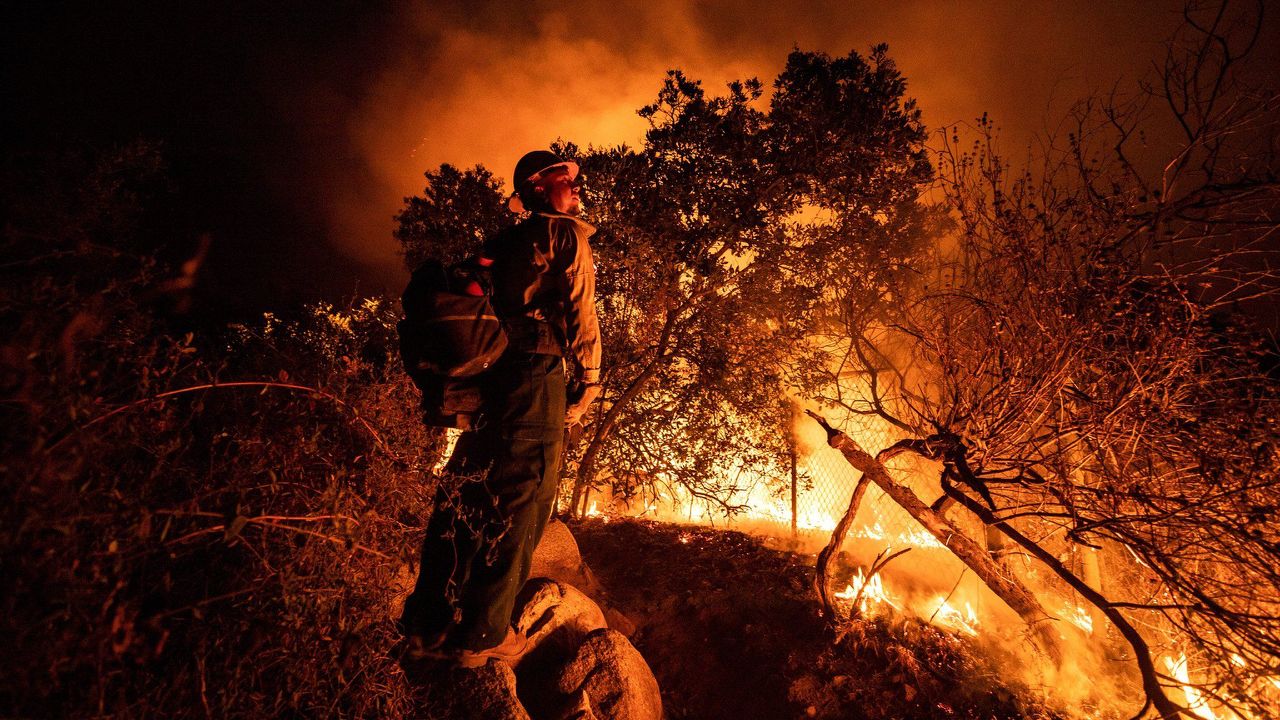 President Trump has dismissed concerns over climate change on a visit to fire-ravaged California, telling an official there it would "start getting cooler".

He told an event in Delaware that four more years of his opponent in the White House would see "more of America ablaze".

During his visit to the US West Coast, Mr Trump repeated his argument that poor forest management was to blame as he met Californian officials involved in the battle against the wildfires at a stop near Sacramento, in the centre of the state.

What else did Trump say about the climate?
When asked by a reporter in California whether climate change was a factor in the massive wildfires, Mr Trump responded: "I think this is more of a management situation."

He claimed that other countries had not dealt with the same level of forest fires, despite major conflagrations in Australia and the Amazon rainforest in recent years that experts attributed to the changing climate.

Mr Trump has previously called climate change "mythical", "non-existent", or "an expensive hoax" - but has also described it as a "serious subject".

He pulled the US out of the Paris climate agreement, which committed the US and 187 other countries to keeping a global temperature rise this century well below 2C (3.6F) above pre-industrial levels.

Climate change takes political centre stage
Although the environment has typically been a sideline issue, getting scant attention even during the Democratic primaries, the topic is one on which President Trump and Joe Biden are sharply divided.

While Mr Trump has backed away from his earlier rhetoric dismissing the notion of manmade climate change as a "hoax" perpetrated by China, his comments on Monday were reflective of the lack of attention he devotes to the issue.

The Trump administration has rolled back more than 70 environmental regulations, many of which deal with climate change. Mr Biden, on the other hand, has moved to the left on the environment in recent months, expanding on his original plan for spending $1.7tn infrastructure and green jobs over 10 years to $2tn over four years.

Despite Monday's attention, the environment still ranks behind issues like healthcare and the economy for most Americans. It is, however, an important topic for younger voters - a group that Mr Biden, in particular, is eager to get to the polls in November.

What's the latest on the ground?
Authorities in California, where 25 people have died since 15 August, report that firefighters are working to contain 29 major wildfires across the state.

They warned that the strong southerly winds and low humidity forecast for Monday could bring an elevated fire risk, and potentially have an impact on the North Complex Fire, which has scorched 106,000 hectares and is only 26% contained.

The US National Weather Service also issued a "red flag warning" for other areas of the West Coast, including Jackson County, Oregon, where the Almeda Fire has destroyed hundreds of homes.

The Oregon Office of Emergency Management said on Sunday that firefighters in the state were struggling to contain more than 30 active wildfires - the largest of which was more than 89km (55 miles) wide.

At least 10 people have been killed in Oregon in the past week. Officials have said dozens of people are missing and warned that the death toll could rise.

One person has died in Washington, where there were five large fires on Sunday.

What are the politicians saying?
Speaking at a meeting with Mr Trump on Monday, California Governor Gavin Newsom acknowledged that "we have not done justice on our forest management", but he said that more than half of the land in California was under federal, not state control.

The state itself owns just three per cent, with the rest owned by private individuals or companies or Native American groups.

But he echoed his own statement from Friday that the fires showed the debate about climate change was "over".

"The hots are getting hotter, the dries are getting drier," he said. "We submit the science is in and observed evidence is self-evident: that climate change is real and that is exacerbating this."

Oregon Governor Kate Brown has said her state is facing "the perfect firestorm" and called the moment "truly the bellwether for climate change on the West Coast.

"And this is a wake-up call for all of us that we have got to do everything in our power to tackle climate change."

What role is climate change playing?
BBC environment correspondent Matt McGrath says that while natural factors such as strong winds have helped the spread of the West Coast fires, the underlying heating of the climate from human activities is making these conflagrations bigger and more explosive.

Nine of the world's 10 warmest years on record have occurred since 2005, and the UN warned this week that the five years from 2016 until this year will very likely be the hottest such period yet recorded. Both Oregon and California have warmed by more than 1C since 1900.

The sustained warmth has seen six of the 20 largest fires on record in California all occur this year. In Oregon, the spate of fires burned almost twice the amount of average annual losses in a week.

In California, a prolonged drought over the past decade has killed millions of trees, turning them into potent fuel for the fires. Mountain regions that are normally cooler and wetter have dried out more rapidly in the summer, adding to the potential fuel load.