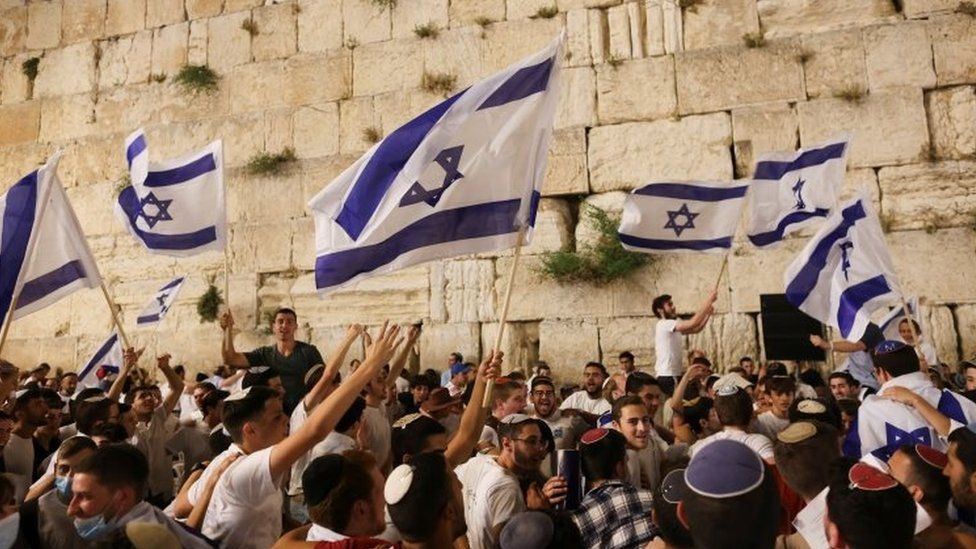 Palestinians have clashed with Israeli police for a third night in Jerusalem, and there are fears of more violence later on Monday over a planned Jewish nationalist march in the city.

The event marks Israel's capture of East Jerusalem - home to the Old City and its holy sites - in 1967.

It is regarded by many Palestinians as a deliberate provocation.

A former high-ranking Israeli defence official, Amos Gilad, called for the march to be cancelled or re-routed, warning Army Radio: "The powder keg is burning and can explode at any time."

Tensions have been high in the city over the threatened eviction of Palestinian families from parts of East Jerusalem's Sheikh Jarrah district.

Hundreds of Palestinians and more than 20 Israeli police officers have been injured in clashes over the past three days, according to medics and police.

A court hearing had been expected on Monday in the years-long case of the Palestinian families. More than 70 people are appealing against an eviction order that would drive them from their homes in favour of Jewish settlers.

But the hearing was cancelled on Sunday at the request of Israel's attorney-general. A new date will be set within the next 30 days.

What happened in the latest clashes?
During Sunday night's clashes in Sheikh Jarrah, Palestinians threw stones at Israeli police, while the officers responded by firing stun grenades and water cannon. There were more skirmishes near the Old City's Damascus Gate.

Palestinian medics said a number of protesters were injured.

Confrontations between Palestinians and Israelis were also reported in the northern Israeli city of Haifa, and near the West Bank city of Ramallah.

Israel's Prime Minister Benjamin Netanyahu defended police action against Palestinian protesters on Sunday, saying his government "shall not allow any radical element to undermine the calm" in the city.

The Quartet of Middle East negotiators - the US, the EU, Russia and the UN - has also expressed concern over the spiralling violence, urging all sides to show restraint.

The UN Security Council will discuss the issue later on Monday.

What is fuelling the violence?
Tensions have escalated since the start of the holy Muslim month of Ramadan in mid-April, with a series of events driving the unrest.

As Ramadan began, clashes erupted nightly between police and Palestinians protesting against security barriers outside Damascus Gate, which had prevented them from gathering there during the evening.

The fate of East Jerusalem goes to the heart of the Israel-Palestinian conflict, with both sides claiming the right to it. Israel effectively annexed East Jerusalem in 1980, in a move not recognised by the vast majority of the international community, and considers the entire city its capital.

Palestinians claim East Jerusalem as the future capital of a hoped-for independent state.