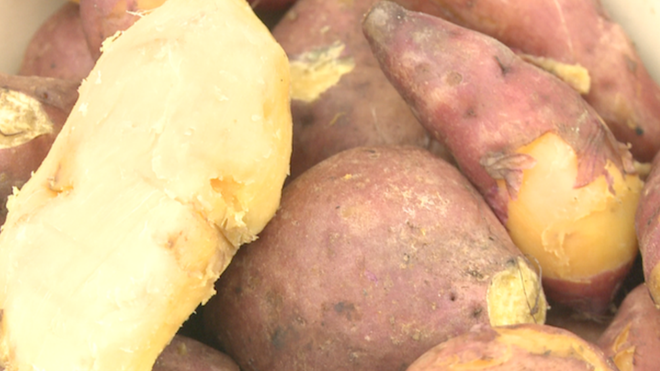 Millions of children across Africa suffer from malnutrition - one way to tackle this is a special type of sweet potato that can deliver an extra vitamin hit which is being developed in Uganda.

It may spend less time in news headlines than Ebola or the Zika virus, but Vitamin A deficiency is a much bigger public health problem in sub-Saharan Africa and far deadlier.

Estimates say that it affects as many as 43 million children across the continent.

Children affected by the condition are more likely to go blind, have their growth stunted, contract diseases and die earlier.

But now scientists think they may have found an ally in the battle against malnutrition, in the form of that popular African staple, the sweet potato.

But these are not just any sweet potatoes. They are orange-fleshed sweet potatoes (OSFP's), rich in a colour pigment called beta-carotene, which is vital in preventing Vitamin A deficiency.

They are not native to Africa, but scientists in Uganda are at the forefront of using a technique called biofortification to increase their availability.

This is awarded to people for "improving the quality, quantity or availability of food in the world".

Because of their work, farmers can now harvest this unlikely solution to a silent killer from the red soil of Uganda.

One of these farmers is 45-year-old Agnes Kalya. She has been growing the orange-fleshed sweet potatoes on her farm in central Uganda since 2007, and sees multiple benefits.

"The thing we like about this orange potato is that when we eat it, we don't fall sick often.

"We stay healthy, even our skin looks good - the young and old alike. It also has high yields, so we get a lot of food, and don't go hungry.

"We make money from selling it too.

Grown by more than 44% of Ugandan farmers, sweet potatoes are a staple food all over the country but the white variety that is commonly consumed does not provide as much Vitamin A.

Through the process of biofortification, scientists combined local varieties of sweet potato with others from around the world to build in more vitamin A, producing a vitamin-rich breed tailored to suit local tastes and local climate.

Dr Mwanga has been developing this agriculture-based strategy for fighting micronutrient deficiency in Uganda for several years.

He says his work presents a viable solution to the problem not just for Uganda, but also for the continen

"There have been campaigns to supply Vitamin A tablets to communities but they've not been sustainable. As you can imagine, traversing the whole country trying to distribute Vitamin A capsules is a challenge."

Research has shown that just one capsule of vitamin A every six months could cut child mortality by 25%. But getting pills to millions of people in remote villages is not just difficult - it's also expensive.

With vitamin A supplements costing as much as $2.70 (Â£2.20) per dose, fighting this deficiency globally through supplements alone would cost almost $3bn (Â£2.4bn) per year, according to a report published on Science Direct.

It's an idea that's been tried before, but not as successfully.

The genetically modified "Golden Rice" was loaded with Vitamin A to tackle the same problems but proved highly controversial, with critics saying that only organic ways of delivering Vitamin A should be relied on.

Although biofortification can sometimes involve genetic modification, Dr Mwanga and his fellow sweet potato researchers only use conventional breeding methods.

The work which won the World Food Prize has been hailed as the single most successful example of biofortification.

However, Dr Mwanga says that the promotion and advertising of such highly beneficial crops is sorely lacking.

"Everywhere you go, you can see advertisements for soft drinks, alcohol, and other foods, but not for agricultural products. We do not have a culture of promoting such things, even though they can save lives."

Promotion is also needed because most communities are used to and enjoy the firm, starchy white or yellow sweet potatoes - which means the benefits of the mushy orange ones must be communicated if they are to be widely adopted.

So far, the orange-fleshed sweet potato has been adopted by thousands of Ugandan farming households, with up to 237,000 households expected to be planting and eating it by 2018. BBC News