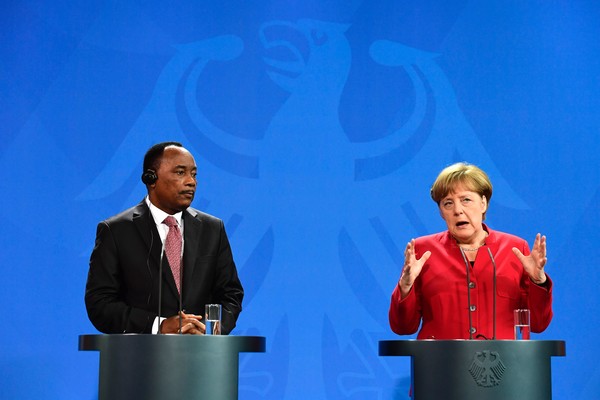 Merkel, under intense political pressure at home for allowing nearly a million migrants into Germany last year, was on the second leg of a three-country African tour that started in Mali and will finish in Ethiopia.

She admitted after meeting Niger's President Mahamadou Issoufou that her goal of stabilizing African countries by creating better economic conditions, thereby tackling one of the root causes of migration, could only be reached in the long term.

"But this cannot be an excuse for not trying to achieve short-term success," Merkel told a news conference.

She said Germany would support Issoufou's government with 77 million euros ($86 million) to combat people-smuggling and illegal migration in the central Agadez region.

Germany would also help Niger's armed forces in their fight against militant Islamists by offering military vehicles and other equipment worth 10 million euros, she said.

The European Union has pledged support for African countries worth 1.8 billion euros, but Niger alone had identified a financial need of 1 billion, the president said.

Roughly 90 percent of migrants who reach the Libyan post, a jumping-off point for the dangerous Mediterranean crossing to Italy, cross through Niger, making it a crucial partner for Europe in controlling migration flows.

Germany, France and Italy have said they want to develop particularly closer relationships with Niger and neighboring Mali. Merkel is the first German chancellor ever to visit Niger, one of the world's poorest countries.

The chancellor has described Africa, with its population of 1.2 billion people, as "the central problem" in the migration issue. Last month she said the EU needed to establish deals with North African countries along the lines of its agreement with Turkey to curb migrant flows across its territory to southeast Europe.

Merkel will travel on to Ethiopia on Tuesday, on the last leg of her first extended trip to Africa since 2011.