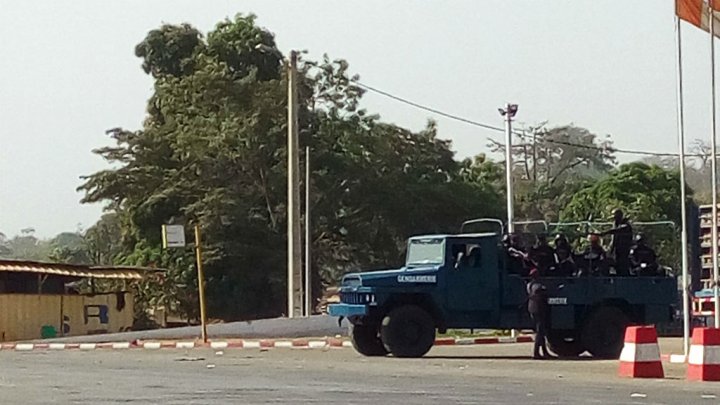 Heavy gunfire was heard from around 2am (0200 GMT) in BouakÃ© â€“ a city of around a half million inhabitants in the centre of the country â€“ and sporadic shooting continued into the late morning.

Military sources said demobilised soldiers â€“ mainly former rebels from the decade-long conflict â€“ broke into police stations across the city, looting weapons before taking up positions at entry points into the city.

â€œThe situation currently is that thereâ€™s sort of a standstill reportedly in the city of BouakÃ©â€¦ between soldiers who have been demilitarised from the previous civil war that occurred in the country, which ended in 2011,â€ FRANCE 24â€™s Sean Lyngaas reported from the capital Abidjan. â€œIt appears they are demanding pay that they say they are owed.â€

Shooting also broke out mid-morning at a military base in Daloa, the main trading hub in Ivory Coastâ€™s western cocoa belt. Residents said demobilised soldiers were behind the unrest, according to Reuters.

BouakÃ© was the seat of a rebellion that controlled the northern half of the worldâ€™s top cocoa grower from 2002 until Ivory Coast was reunited following a civil war in 2011.

â€œWeâ€™re hearing sporadic gunfire, but nothing alarming. With that said, businesses are closed and there are very few people in the streets,â€ a BouakÃ© resident told FRANCE 24â€™s The Observers. â€œI can see soldiers driving around on motorcycles and hanging off of the side of cars from my balcony. Theyâ€™re in control of the entrance and exit to the city.â€

An officer at Ivory Coastâ€™s military headquarters in the commercial capital Abidjan said reinforcements had been sent to BouakÃ©.

â€œThe situation remains unstable and serious in BouakÃ©... Some civilians and even active-duty soldiers have started to rally to them,â€ he told Reuters.

He added that, while the ex-soldiers had not yet stated their demands, it was believed that they were seeking payment of money they believed they were owed by the government.

A facility in BouakÃ© housing around 200 former soldiers, who were initially brought into the army before later being demobilised, was closed in November.

A similar uprising occurred in 2014 when hundreds of soldiers barricaded roads in several cities and towns across the country demanding payment of back wages. The government agreed a financial settlement with the soldiers, who returned to barracks.