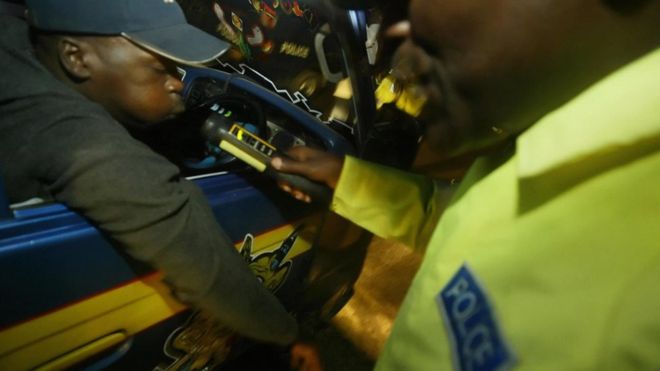 Kenyans can no longer be charged after a breathalyser test, after a bar owner argued they were ruining his business.
Kariuki Ruitha complained they violated Kenyans' constitutional rights to make their own lifestyle decisions - including how much to drink.

After a three-year battle, the Court of Appeal ruled in his favour.

Kenya has some of the most dangerous roads in the world, with 1,574 people dying in accidents in the first half of 2016 alone.

Sitting in the Court of Appeal, the three judges said drink drivers could still be charged under traffic laws - at which point a breathalyser can be used.

According to local media reports, Mr Ruitha, who owns a bar in Nairobi, first brought the case to trial more than three years ago, when he sued the Minister for Transport.

He had lost 80% of his business because customers were being breathalysed as they left the premises - leading to him lay off 44 employees, The Star reported.

In 2014, his lawyer described the rules as "oppressive and unreasonable" if someone had not already committed a driving offence.

His argument was backed up by a second bar owner, who had originally launched a separate case.

However, their victory may be short-lived. The judges have sent the law back to parliament to be rewritten.

"As the need to prohibit drunk-driving is still dire, and this matter being of great public interest, no doubt the authorities will move with quick dispatch to remedy the position," they urged, website MediaMax reported.