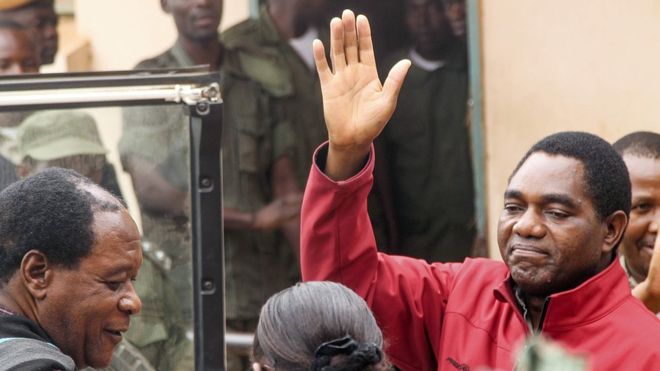 Forty-eight Zambian MPs from the opposition UPND have been suspended for 30 days for boycotting President Edgar Lunguâ€™s state of the nation address.

They refused to attend in March as they argued Mr Lungu was not the legitimate winner of last yearâ€™s election.
Parliament speaker Patrick Matibini said the MPsâ€™ boycott was â€œgross misconductâ€, Lusaka Times reports.

The suspension comes as UPND leader Hakainde Hichilema is in detention facing treason charges.
Zambiaâ€™s government has faced criticism from the countryâ€™s Conference of Catholic Bishops over its handling of the case of the opposition leader. It warned that Zambia was slipping towards a â€œdictatorshipâ€.

The suspended 48 MPs represents nearly the entire parliamentary party of 58.

The speaker said their ban takes effect immediately and dared the suspended MPs to resign:
â€œI therefore challenge the UPND members that if they still maintain that they do not recognise the president, they should resign on moral grounds.â€

Zambia has been locked in a political crisis since Mr Hichilema was arrested in April following an incident in which a convoy he was travelling in allegedly refused to give way to the presidential motorcade.

Mr Hichillema, who lost to Mr Lungu in last yearâ€™s close election, is accused of endangering the presidentâ€™s life. His lawyers argue that the charges are politically motivated.