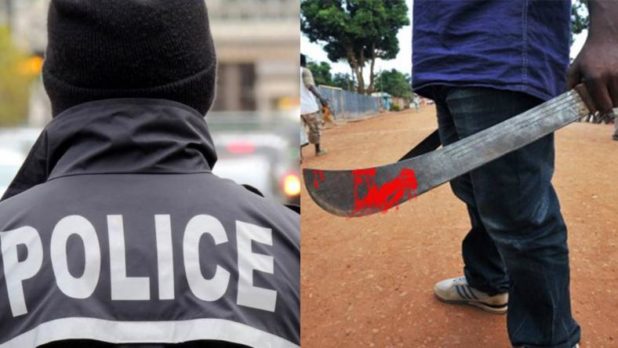 A man believed to be mentally imbalanced is reported to have invaded the Omu-Aran Police Division in Kwara state of Nigeria and attacked the police officer on duty.

The unnamed ‘mad man’ wielding a machete and other dangerous weapon attacked Sgt. Abu on Tuesday, April 2, 2019, leading to his death later at the hospital.

An eye witness reported as saying that the officer was transferred from the nearby private hospital to another Medical Centre in Ekiti State where he died the next day, Wednesday, April 3.

The anonymous witness is quoted as saying: “I was on my motorcycle when I saw the fleeing man holding a cutlass and a wood. He was wearing red attire and we followed him.

Later, some other motorcyclists joined in the chase and on getting to Taiwo Area, he stopped, dropped his weapons and raised up his hands. It was in the process that he was arrested by the police and moved to the station.”

“Dad, why are you not coming out, Why did you kill mummy?” - Children aged 3 and 7, ask their father in jail

It is far from clear what motivated the suspect to launch the bloody attack on a uniformed law enforcement officer on duty.

Spokesperson of the Aran Divisional police command, Ajayi Okasanmi is reported as having confirmed the incident, saying an investigation is underway to unravel the circumstances surrounding the attack.