A/R : Nigerian shops at Suame Magazine shut down by Ghanaians 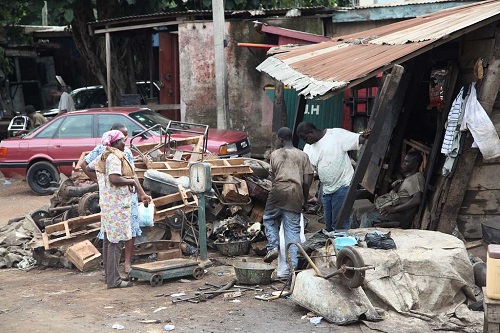 Shops of Nigerians at Suame Magazine at Kumasi in the Ashanti Region have been shut down by their Ghanaian counterparts.

According to the Nigerians who deal in vehicle spare parts, their Ghanaian counterparts from last week Thursday shut down their shops preventing them from selling.

Speaking to Joy FM, some of the Ghanaian retailers at the market accused the Nigerians of evading tax and selling substandard products which is a threat to the market.

The Ghanaian retailers added that the actions of these Nigerian shop owners are affecting their sales because most people do not want to buy the secondhand products anymore but the substandard new ones brought in by the Nigerians.

"People don't buy from us anymore and they (Nigerians) are smart and fast, because of the Nigerians they don't buy anything from Ghanaians, they have destroyed the market they bring in substandard parts because of that everybody wants new not the home used..."

President of the Nigerian Retailers Association Ike Chuku said they have lodged an official complaint with the police and they assured them that they will help deal with the situation.

The Nigerian High Commission in Ghana has also appealed to the media and the public to be circumspect with their reports and commentary on crimes committed by Nigerians.

According to the High Commission, it is unfair for all Nigerians in Ghana to be tagged as criminals because some have been involved in series of crimes in the country.

In a statement signed by the Nigerian High Commissioner to Ghana Ambassador Olufemi Michael Abikoye it read:

” Suffice to say that at times like this, a situation where five (5) Ghanaians in company of three (3) Nigerians allegedly kidnapped two (2) Canadians but seems to enjoy wider press coverage as a crime committed by the Nigerians and considers Ghanaians only as accomplices leave much to be desired on the objectivity of such report. In the light of the above, the High Commission wishes to appeal to the local traditional media and social media to be highly circumspect in such reportage.”

The statement also indicated that categorically stated that whoever commits a crime and found guilty must face the consequences that accompany such crimes.