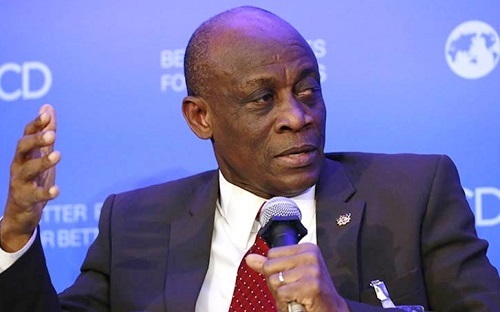 Former Finance Minister Seth Terkper has condemned the government for the taxes it has levied since taking office in 2017.

Speaking to JoyNews’ UpFront show, he said Ghanaians are “paying more taxes than they did in 2016,” under John Mahama, a situation which deviates from what the governing New Patriotic Party (NPP) promised, he said.

Vice President Mahamudu Bawumia, for instance, slammed the then Mahama-led government for “increasing taxes under the economic difficulties they created.”

An NPP government will do differently, he posted on Twitter. The party also promised to scrap “nuisance taxes” imposed by the NDC.

According to Mr. Terkper, this, however, is not the case.

He told the host, Raymond Acquah, that, the NPP under President Nana Akufo-Addo has burdened the people with more direct and indirect taxes.

The NDC introduced this in January 2016 with the passage of the Energy Sector Levy Act (ESLA) a month prior.

The government said it was needed to pay off the loans in that had accrued in the power sector.

Ken Ofori-Atta, in July this year, announced at least 15 new measures to address the continuing energy sector challenges which included increasing the Energy Sector Levy from 17 per cent to 21 per cent.

This, Mr. Terkper says is a deviation from the NPP’s stance against taxes when they were in opposition.

The Minister also maintained his party’s position that the Value Added Tax (VAT) has been increased indirectly.

The government in 2018 maintained the VAT at 17 per cent but stripped two components, the GETFund and the NHIL both 2.5 per cent each from it.

The two were made straight levies, which producers and service providers say caused an increase in cost.

The benchmark value of import duties at all of the country’s ports was also slashed by up to 50 per cent this year.

However, Mr Terkper says this hasn’t necessarily helped all traders but rather increased the cost of transaction for some.

Also, the Personal Income Tax has seen a rise from 25 per cent to 35 per cent, Mr. Terkper noted.

He said other temporary taxes that the NDC introduced with the aim of scrapping after a while have also been maintained by the government.

All these, the former Minister said has increased cost, “the businesses are saying it,” he noted, adding that Ghanaians loathe the current economic conditions.