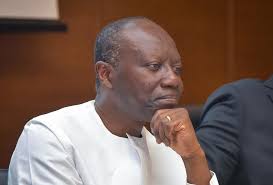 Finance Minister Ken Ofori-Atta has revealed that the coronavirus pandemic will cost Ghana as much as GHS9,505 billion.

This will be 2.5 percent of Ghanaâ€™s revised GDP.

The Minister who briefed Parliament today on the state of the country's finances in these trying times said â€œSpeaker, the total estimated fiscal impact from the shortfall in petroleum receipts, shortfall import duties, the shortfall in other tax revenues, the cost of the preparedness plan, and the cost of Coronavirus Alleviation Programme is GHS9,505 billion,â€

Ultimately, there will be a â€œfiscal gap of GHS11.4 billion,â€ the Minister added.

READ ALSO: Ministers, other presidential appointees donate 50% of their salaries to COVID-19 Fund

Import duties, for example, will fall short of target by GHS808 million for the 2020 fiscal year, the minister indicated.

Mr Ofori-Atta however he $100 million announced by the President to help with Ghanaâ€™s handling of the virus is ready.

â€œI wish to assure that money has been secured and is available to be disbursed in accordance with public financial management procedure.â€

He clearly made it known that the pandemic will have an effect on Ghana's economy.

He added that thereâ€™s been an increase in demand for dollars which could impact negatively on foreign reserves.

â€œHowever, the increase in demand for gold will likely impact positively on the balance for payments on the Ghanaian economy. Weâ€™re observing reduced imports which has a favourable impact on volatility which has an impact on production in Ghana,â€ he explained.

The effect of the virus on the economy will worsen because Ghana just began a two-week partial lockdown of Accra, Tema, Kumasi and Kasoa.

The pandemic will also take a toll on Ghanaâ€™s GDP growth.

Mr. Ofori-Atta said a preliminary analysis of the impact of the virus â€œon the real sector shows that the 2020 projected real GDP growth rate could decline from 8 percent to 2.6 percent with an outbreak and 1.5 percent with a partial lock-down.â€

The Minister also explained that â€œthe overall fiscal deficit will increase from the programmed GHÈ¼18.9 billion to GHÈ¼30.2 billion, which will be 7.8 percent of revised GDP.â€

â€œThe primary balance will correspondingly worsen from a surplus of GHÈ¼2,811 billion (0.7 percent of GDP) to a deficit of GHÈ¼5.6 billion (1.4 percent of GDP),â€ he added.